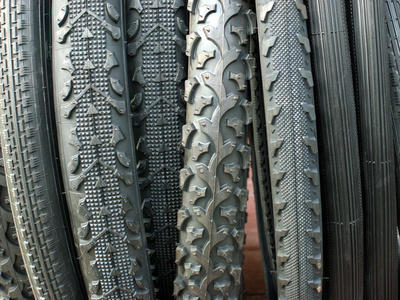 If you've shopped for a bike recently, or even if you're an experienced rider who's ever shopped for new tires or inner tubes, you've come up against the confusing arrary of sizes available. What do all those numbers mean? And why have so many choices in the first place? Why don't they come up with a standard?

As they say in the computer industry, the great thing about standards is that there are so many to pick from. It may sound surprising to you that there actually used to be many times more varieties of tire than are common today. In the early years from the invention of the bicycle through the early 1900's, many bike manufacturers had their own set of sizing standards that only applied to their own bikes. It is a testament to how far we've come that today you can buy tires, tubes, and wheels from three different manufacturers and be sure that they will all work fine together, as long as you select the proper sizes of each.

The most important measurement of the tire is the diameter; the second most important is the width. 99% of the bikes you see on the road or in stores will have one of two different diameters: 26-inch or 700C.

You can change the width of tire that you use without having to replace your rims or wheels, as long as the difference is not too extreme.

Most typical 26-inch tires have a width of about 1.75 inches up to 2.2 inches. There are some 26-inch tires available that have a smooth road tread and may be as narrow as 1 inch to 1.5 inches. For downhill mountain bikes, there are tires about 2.5 inches wide, and for snow bikes, even up to 4 inches wide!

You'll usually find the tire size printed on the sidewall of the tire itself, expressed as diameter X width, e.g. 26x1.95.

Standard 26-inch tires have a BSD of 559 millimeters.

The modern standard for road, cyclocross, and many hybrid tires is 700C. You'll also find 700C tires on some European-style cruiser bikes.

The "700" refers to the rough outer diameter of the tire, although the actual outer diameter will vary greatly, depending on the type of tire and tread pattern. The "C" means NOTHING; it does not stand for "centimeters." Think about it--a 700-centimeter tire would be HUGE, over 21 feet tall! And don't say "700CC" unless you want to look like a complete newbie. For the origin of the term 700C, see "A Brief History of 700C" below.

Most high-performance road bike tires have a width of 23 or 25 millimeters, although some are as narrow as 18mm or as wide as 28mm. Cyclocross and touring tires range from 28mm to 38mm (although the maximum width for officially-sanctioned cyclocross events is 32mm), and hybrid bikes use tires 35mm to 45mm.

You'll find the size printed on the side of most tires, e.g. 700Cx28. Sometimes, the manufacturers will put the "C" after the width number, e.g. 700x35C, leading some people to incorrectly read it as 700x350, which again, if correct, would be a HUGE tire!

To make matters even more confusing, sometimes the size is printed on the tire as the width followed by the BSD, e.g. 23-622.

Some older road bikes (mid 1980's and earlier) used 27-inch tires; these were used on most of the "10-speed" bikes that many of us grew up with. These are NOT the same as the 700C tires found on modern road bikes. Very few, if any, modern bikes are manufactured using the 27-inch tire size, but replacement tires, inner tubes, and wheels are still available for those older bikes.

Some time after the mountain bike boom in the mid-80's, somebody got the idea, "Hey, why don't we pick a tire size that's better suited to the way mountain bikes are used?" A few manufacturers started designing mountain bikes with wheels that used the same size rim as road bikes (700C or 622mm BSD), but with fat off-road-style tires. The resulting tires ended up having an outer diameter of around 29 inches, so these bikes (and the tires) are now referred to as "29ers." Today, almost every major bicycle manufacturer has 29er mountain bikes, and a wide selection of 29er tires is available.

Similar to 26-inch mountain tires, 29er tires typically range from 1.95 inches through 2.3 inches wide. By general agreement within the bike industry, the size of 29er tires is usually printed using the "English" measurements, e.g. 29x2.2, rather than the metric equivalent of 700x56C.

Some time after the mini-boom of 29er mountain bikes occured, there were some people in the bike world who felt that the larger 29er wheel had some disadvantages. Whether these disadvantages are real or perceived is a matter of differing opinions, but regardless, detractors of the 29er felt that a "happy medium" tire size between 26 and 29 was needed to provide "the best of both worlds." They looked back in time to the 650B wheel size, which was somewhat prevalent on touring bikes years ago.

650B mountain bikes tires have an outer diameter of about 27.5 inches, so in the mountain bike world, tire sizes are often listed using this, e.g. 27.5x2.1. For 650B tires with a smooth road/touring tread, we usually stick with the road sizing convention, e.g. 650Bx32.

The 650B/27.5 phenomenon has not quite taken hold as strongly as the 29er concept. Only a handful of companies are making 650B bicycles, and the selection of tires is rather limited.

Some small sizes of women's-specific road bikes use a tire size known as 650C. This size was also used on some triathlon bikes a few years back, but this is becoming less common. 650C tires are commonly available in the same widths as 700C performance road tires, i.e. from 650x18C through 650x25C.

Inner tubes made for narrow 26-inch tires (e.g. 26x1) are compatible with 650C tires, but the tires themselves are NOT interchangeable.

You may come across old cruiser bikes or very old hybrid bikes with tires that have sizes like 26x1-1/8, 26x1-1/4, 26x1-3/8, 26x1-3/4, etc. Any of these measurements that use a FRACTION in the size are special sizes, those mentioned above that were manufacturer-specific (most commonly old Schwinn bikes). If you need replacement tires for a bike such as this, we do have a few of these in stock, and they are usually available by special-order. You'll also probably need to order matching replacement inner tubes.

Most BMX bicycles use 20-inch tires that have a BSD of 406mm, available in widths from 1.5 to 2.5 inches with a wide variety of tread patterns to suit different riding styles.

While adult bikes come in different frame sizes with standard-sized wheels, bikes for kids are sized according to the wheel size. Most independent bike shops carry kid's bikes in 12-inch, 16-inch, 20-inch, and 24-inch wheels.

Many years back, there were four different variations of tires sizes available known as 700A, 700B, 700C, and 700D. They had different bead seat diameters, but all shared the same characteristic of being exacly 700 millimeters on the outside diameter.

Bike racers of the day had several wheel sets that they would swap on and off their bikes, with one set being a 700A, another being a 700B, and so on. They'd choose the appropriate size tire based on the conditions they'd be riding that day--the skinniest one for race day, a somewhat thicker one for training, and an ever thicker one for training on rough roads or dirt. Since all of the wheel sets had an outside diameter of 700mm, they could be sure that whichever wheel set they chose, it would fit within their frame.

The downside of this scheme was that they'd have to re-align their brakes every time they swapped wheels, to account for the different rim diameters. However, this was easier back then, because the arms on road brake calipers allowed for a much wider range of adjustment than is typical on modern road brakes.

For various reasons, most of these tires sizes dropped out of use, except for 700C, which eventually became the de facto standard for modern road bikes.

The advantage of this is that there are now fewer road bike tire sizes to keep track of. The downside of the current standard is that there is no consistency in the outer diameter of tires. 700C is used to refer to any tire, rim, or wheel with a 622mm BSD, but it could be on a skinny-tired road bike where the wheel has an actual diameter of only 660mm (which is actually a little LESS than 26 inches!), or a mountain bike with a wheel diameter of over 29 inches.