Having your seat adjusted to the proper height is one of the most important factors to enjoying your bicycle rides most efficiently and comfortably. There's nothing more frustrating, then, to have your seat constantly slipping down, or swiveling side-to-side, or both.

Fortunately, this is usually an easy problem to fix.

Clean and apply new grease to the seatpost 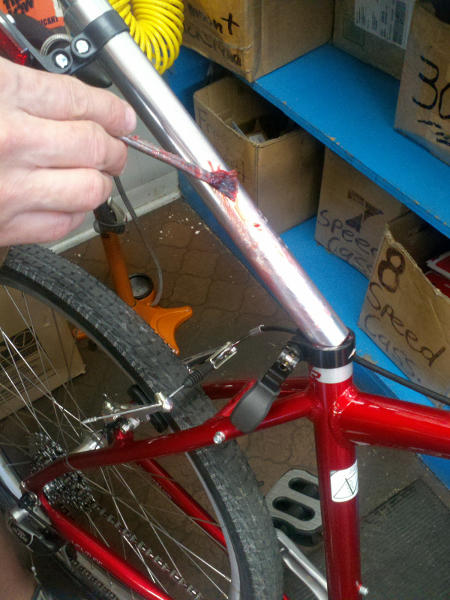 When we assemble a new bicycle, we apply a thin coat of grease inside the seat tube of the bike frame. This helps the seatpost grip and stay in place. This might sound counter-intuitive; grease is slippery, so wouldn't that make it slip more? In reality, the grease actually helps the surfaces of the seatpost and seat tube stick together. It's kind of like putting sand under your car tires when you're stuck in the snow. At the same time, the grease prevents corrosion and keeps the seat post from getting permanently stuck in the frame.

Periodically, you should remove your seat post from the frame, and wipe the old grease off with a rag. Insert the rag into the frame with your finger and try (as much as possible) to clean the old grease from the inside of the seat tube as well.

Using your finger or a brush, apply a thin coat of new grease to the inside of the seat tube, or the outside of the seatpost. Re-insert the seat post to your preferred height, and clamp it in place.

Use standard bicycle grease if your frame and seatpost are both any kind of metal (steel, aluminum, or titanium). If either your frame or seatpost, or both, are carbon fiber, DO NOT use grease. Instead, use a carbon assembly paste. This performs the same function as grease, but is specially formulated so that it does not chemically react with the carbon fiber material.

Check and replace the seatpost clamp

The clamp that holds your seat post in place in the bike frame is either a plain bolt-on type, or a quick-release. The quick-release models are convenient, because they allow you to change your seat height as needed without using any tools. However, the bolt-on models do tend you keep your seatpost in place more reliably.

If you have a bolt-on clamp that's not holding, the bolt or clamp assembly may be stripped or cracked. Replacements can be found from around $8 to $25, depending on the quality. 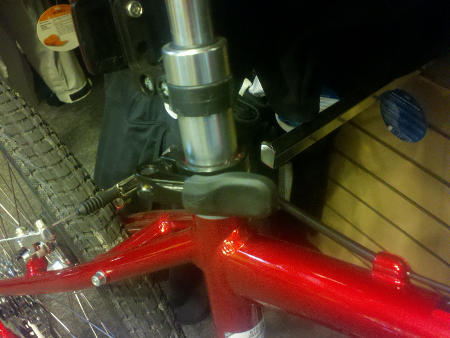 If you can't find that ideal adjustment point, it may be possible that your quick-release lever is worn out. The quick-release clamps that come on inexpensive bikes tend not to hold very well even when brand new. Replacement levers can be found for as little as around $10, or as much as $40 for a very high-quality model that will be less prone to wear out. 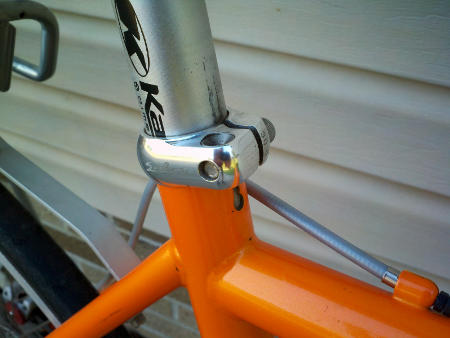 If you're not sharing your bike among family members, and you don't have any need to adjust your seat height on a regular basis, you should consider replacing your quick-release clamp with a bolt-on clamp. You can get a higher-quality replacement at a more reasonable cost, and it will hold your seat in place much better.

When installing your seat clamp, make sure the opening in the clamp lines up with the slot in the frame (except for carbon frames or seatposts). Usually the slot faces the rear of the bike, but sometimes they face the front. It may help to apply a little grease to the inside surface of the clamp, as well as to the threads of the adjustment bolt. 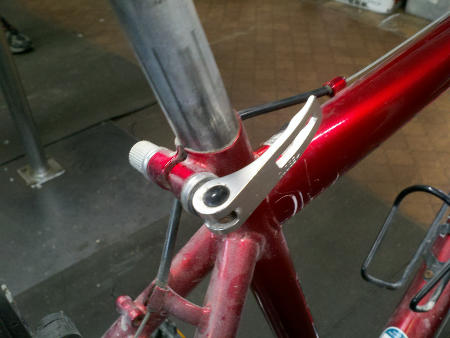 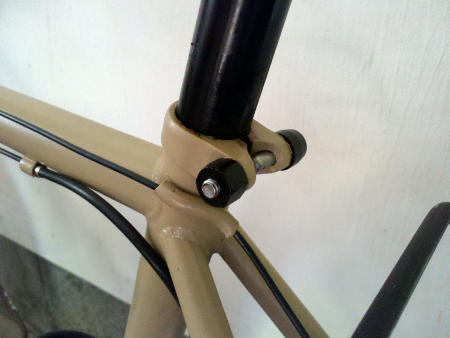 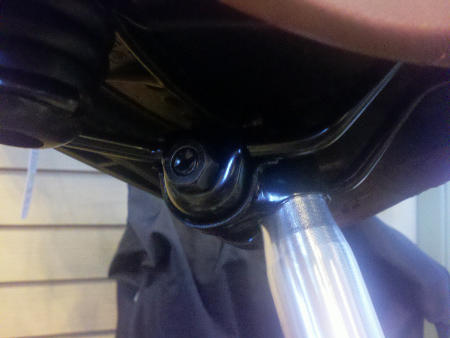 You might not be having a problem with your seatpost slipping down, but maybe you're seat is spontaneously tilting forward or backward while you're riding. This is an issue with the clamp at the top of the seatpost that holds your seat.

Some hybrid and cruiser bikes have a style of seat clamp with two nuts on the left and right underside of the seat. You can usuallly tighten these two nuts with a 14mm socket wrench. Alternate tightening the left and right sides a little at a time so that the tension is balanced on both sides.

Many modern bikes have a clamp that holds the tops and bottoms of the seat rails between two wedges. This assembly is held in place by a single bolt, which can usually be adjusted with a 6mm hex wrench. Try tightening this bolt if you're having trouble with your seat angle slipping. 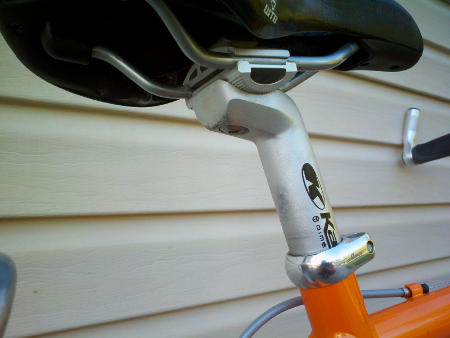 Some of these single-bolt clamps have a smooth clamp surface, which provides an infinite range of adjustment of your seat angle, or "micro-adjustment" as it's called. Others have a serrated surface, kind of like a set of teeth that lock the seat in place at your desired angle, but you have to choose the angle to match one of the "clicks" available within the set of teeth. If you've got a serrated clamp and you've been have tilt slipping issues, you probably need a new seatpost, because the teeth have become ground down.

For aggressive off-road riding, the best style of seatposts have a dual-bolt clamp. The two bolts work in opposition from the front and rear of the clamp to keep your seat at the desired angle. This gives you the best of both worlds: micro-adjustment and secure holding power. 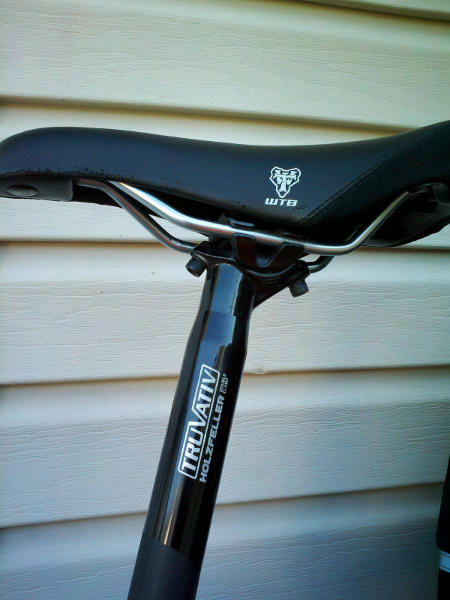 Regardless of which of the above types of seat rail clamps you have, if you've tightened the bolts and you're still having trouble with the seat tilting on the fly, follow a procedure similar to that described above for the seatpost and frame seat tube: Take the clamp apart, remove the seat, and clean any old grease and grime from all of the bolts and pieces. Inspect the pieces to make sure they're not cracked or stripped. Apply grease on the bolt threads and where any metal-to-metal contact occurs, and re-assemble everything.

Of course, if you're not into the do-it-yourself thing, bring your bike on in to any Century Cycles store, and any of our expert mechanics can check it out and do what it takes to get you rolling again.

Note that seatposts come in many different sizes. The diameter of the seatpost is measured in millimeters. This must match the INSIDE diameter of the seat tube on your bike's frame. There is no standard diameter, but some of the most common on modern bikes are 27.2 millimeters, 30.6 millimeters, and 31.6 millimeters. If you buy a seatpost that is too large by even 1/10 of a millimeter, it probably won't fit in your frame. Likewise, if your seatpost is too small by 1/10 of a millimeter, it WILL slip down, even after all of the above corrective actions are taken. 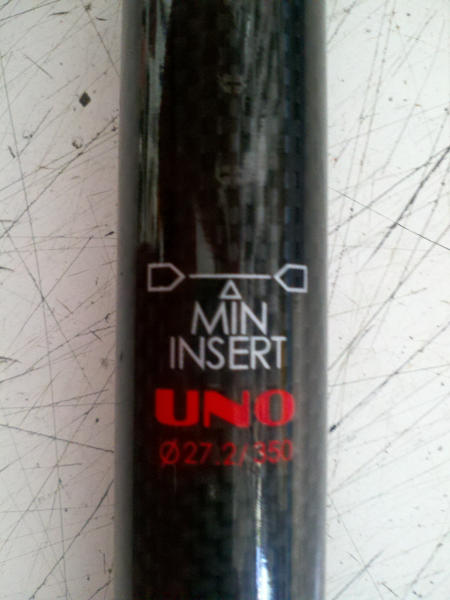 Seatposts also come in different lengths. Almost all of them are marked with a "Minimum Insertion Point." This means that the seatpost must be installed so that all of the area below the minimum mark is within the seat tube in the bike frame. If you ignore this guideline, you run the risk of cracking your frame, causing permanent damage to it, and maybe to yourself!

If you feel the need to raise the seat higher than the minimum insertion point, then the bike you're riding is likely too small for you. However, you may be able to address the issue by purchasing a longer seat post.