From the April 1, 2008 issue of Bicycle Retailer and Industry News: 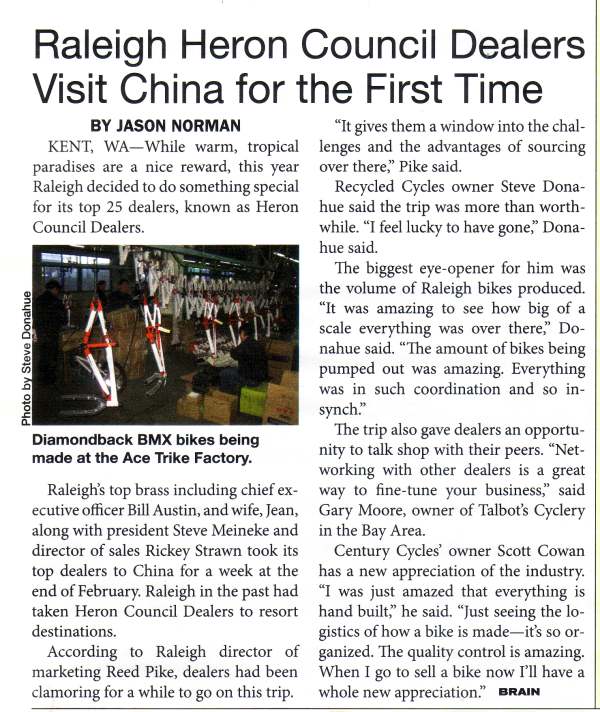 KENT, WA - While warm, tropical paradises are a nice reward, this year Raleigh decided to do something special for its top 25 dealers, known as Heron Council Dealers.

Raleigh's top brass including chief executive officer Bill Austin, and wife, Jean, along with president Steve Meineke and director of sales Rickey Strawn took its top dealers to China for a week at the end of February. Raleigh in the past had taken Heron Council Dealers to resort destinations.

According to Raleigh director of marketing Reed Pike, dealers had been clamoring for a while to go on this trip.

"It gives them a window into the challenges and the advantages of sourcing over there," Pike said.

Recycled Cycles owner Steve Donahue said the trip was more than worthwhile. "I feel lucky to have gone," Donahue said.

The biggest eye-opener for him was the volume of Raleigh bikes produced. "It was amazing to see how big of a scale everything was over there," Donahue said. "The amount of bikes being pumped out was amazing. Everything was in such coordination and so in-synch."

The trip also gave dealers an opportunity to talk shop with their peers. "Networking with other dealers is a great way to fine-tune your business," said Gary Moore, owner of Talbot's Cyclery in the Bay Area.

Century Cycles' owner Scott Cowan has a new appreciation of the industry. "I was just amazed that everything is hand built," he said. "Just seeing the logistics of how a bike is made--it's so organized. The quality control is amazing. When I go to sell a bike now I'll have a whole new appreciation."