The temperature hovered just above 20. A bank of clouds parted enough to let the sun stream through. Icy remnants of the last snowfall clung to the grass.

It was perfect weather for golf.

At least it seemed so to the hardy golfers who teed up buckets of practice balls Saturday at The Range, a practice facility in Boston Heights.

Like some others in the Akron area who were out this weekend pursuing what seemed like out-of-season activities, these golfers weren't about to let a little cold interfere with their favorite warm-weather sport.

"It's not that cold," Beachwood resident Ken Traeger insisted, swinging his driver while dressed in layers of shirts but no coat. The radiant heaters in the driving-range stalls were enough to keep him comfortable; in fact, he said he was bothered more by the sun in his face, which made it hard to keep track of the ball, than by the brisk air.

Traeger said he visits The Range about once a week, as long as the temperature doesn't fall much below the low 20s or the wind doesn't kick up. "Snow blowing in the face isn't too good, either," he said.

Phil Conard of Cuyahoga Falls and his 10-year-old son, Seth, were sharing some guy time while wife/mom Elaine was out on a 20-mile marathon training run. Seth, though, was less enthusiastic than his dad.

Although he's in a junior golf league in Macedonia, Seth admitted he'd rather be playing video games than hitting balls toward little yellow flags on a frigid day.

"He keeps hoping the real golf game will be just as easy (as the virtual kind)," his father said with a grin. "Dad keeps hoping as well."

While the golfers were sharpening their skills on the driving range, Robert Boltz of North Royalton was
pacing the Ohio & Erie Canal Towpath Trail, getting in one of the fitness walks that have helped him drop 20 pounds since Thanksgiving.

Boltz's pedometer told him he'd logged nine miles by the time he broke for lunch — chicken, he promised — at the Winking Lizard in Peninsula.

The chill wasn't slowing his gait as he arrived in Peninsula. "I think the colder, the better," he said gamely from beneath his hat and down coat.

Peninsula resident Kevin Madzia probably wished he could have been out in the cold air.

Madzia is a cyclist, but the closest he got this day to his favorite pursuit was working at Peninsula's Century Cycles. But he'd been out biking the previous Sunday, he said.

It had promised to be a dry day, he said, but once he was on the road, sleet started to fall. Still, he wasn't the only one out in the miserable weather, he said. He passed some golfers on a course along his route.

"I was wondering which one of us was crazier," he said.

The secret to comfort on wheels is dry conditions and the right clothing, Madzia said — in his case, running tights under windbreaker pants, a wool jersey under a windbreaker jacket, and a polyester liner and waterproof cover with his biking helmet.

"If you like to bike, you do what you gotta do," he said.

Customer Anne Kluznik, who had driven all the way from Mentor for a repair, agreed. "Honestly, (if) you get your fingers and toes figured out, you're comfortable," she said.

She probably would have been riding Saturday if she could, she said. "Better than being bored." she said.

She still might get that chance this weekend. The National Weather Service is predicting colder conditions today with a high around 14 and a wind chill as low as minus 17

For some diehards, that's practically reason to break out the sunscreen.

Mary Beth Breckenridge can be reached at 330-996-3756 or mbrecken@thebeaconjournal.com. 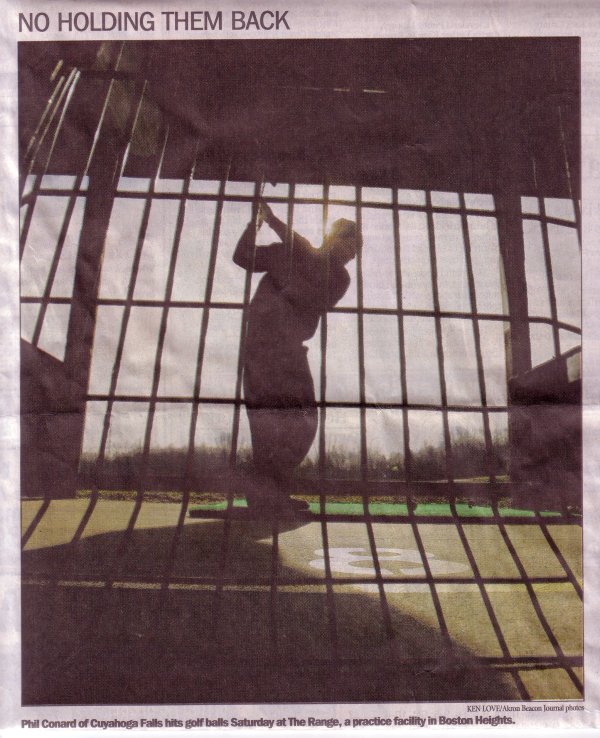 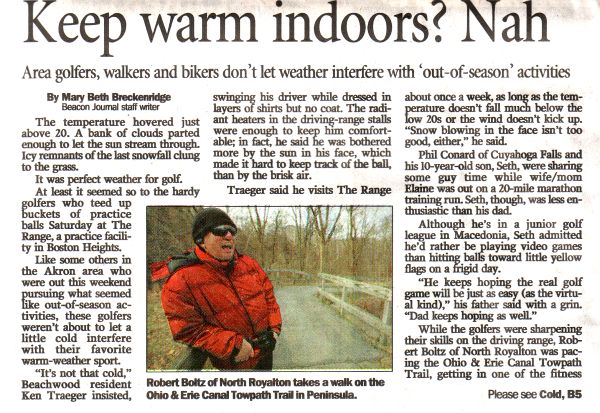 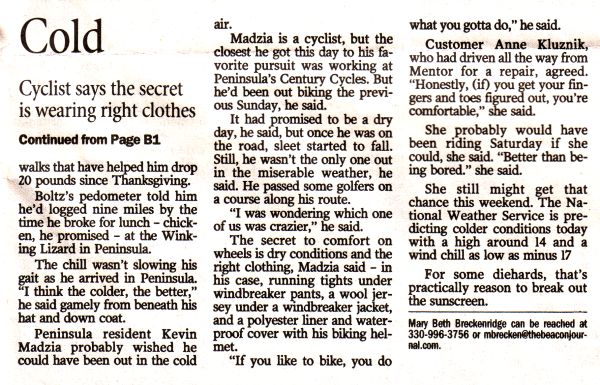