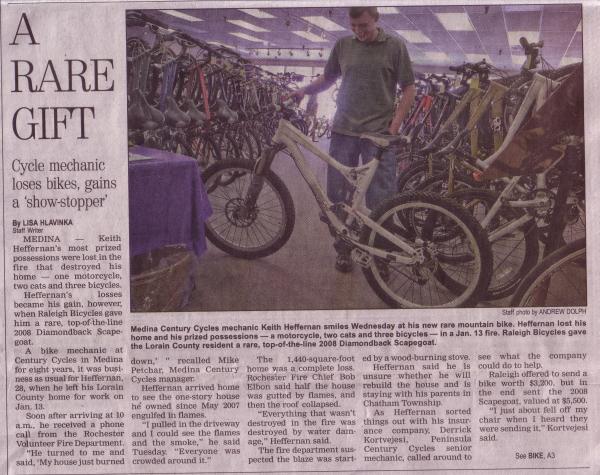 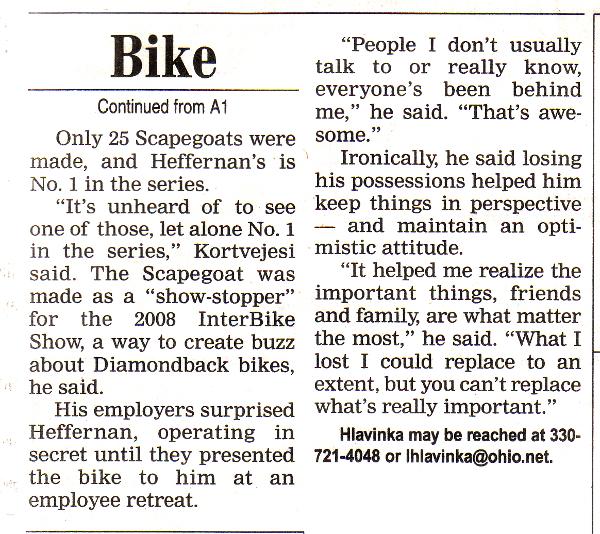 MEDINA - Keith Heffernan's most prized possessions were lost in the fire that destroyed his home - one motorcycle, two cats and three bicycles.

Heffernan's losses became his gain, however, when Raleigh Bicycles gave him a rare, top-of-the-line 2008 Diamondback Scapegoat.

A bike mechanic at Century Cycles in Medina for eight years, it was business as usual for Heffernan, 28, when he left his Lorain County home for work on Jan. 13.

Soon after arriving at 10 a.m., he received a phone call from the Rochester Volunteer Fire Department.

"He turned to me and said, ‘My house just burned down,' " recalled Mike Petchar, Medina Century Cycles manager.Heffernan arrived home to see the one-story house he owned since May 2007 engulfed in flames.

"I pulled in the driveway and I could see the flames and the smoke," he said Tuesday. "Everyone was crowded around it."

The 1,440-square-foot home was a complete loss. Rochester Fire Chief Bob Elbon said half the house was gutted by flames, and then the roof collapsed.

"Everything that wasn't destroyed in the fire was destroyed by water damage," Heffernan said.

The fire department suspected the blaze was started by a wood-burning stove.

Heffernan said he is unsure whether he will rebuild the house and is staying with his parents in Chatham Township.

As Heffernan sorted things out with his insurance company, Derrick Kortvejesi, Peninsula Century Cycles senior mechanic, called around to see what the company could do to help.

"I just about fell off my chair when I heard they were sending it," Kortvejesi said.

Only 25 Scapegoats were made, and Heffernan's is No. 1 in the series.

"It's unheard of to see one of those, let alone No. 1 in the series," Kortvejesi said. The Scapegoat was made as a "show-stopper" for the 2008 InterBike Show, a way to create buzz about Diamondback bikes, he said.

His employers surprised Heffernan, operating in secret until they presented the bike to him at an employee retreat.

"People I don't usually talk to or really know, everyone's been behind me," he said. "That's awesome."

Ironically, he said losing his possessions helped him keep things in perspective - and maintain an optimistic attitude.

"It helped me realize the important things, friends and family, are what matter the most," he said. "What I lost I could replace to an extent, but you can't replace what's really important."