From the Saturday, July 12, 2008 edition of the Cleveland Plain Dealer: 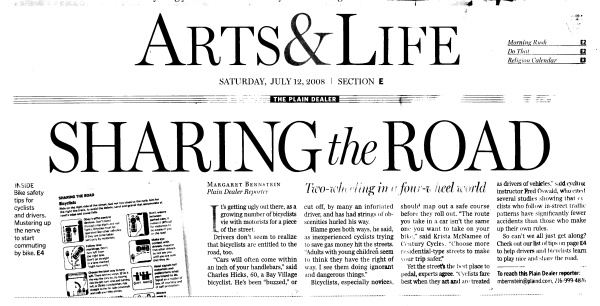 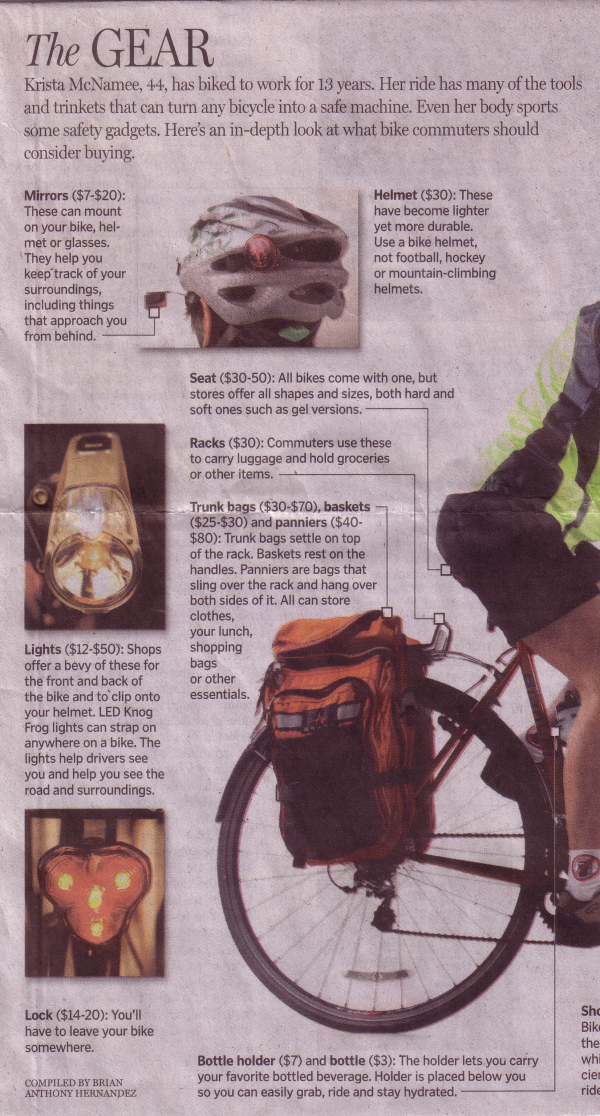 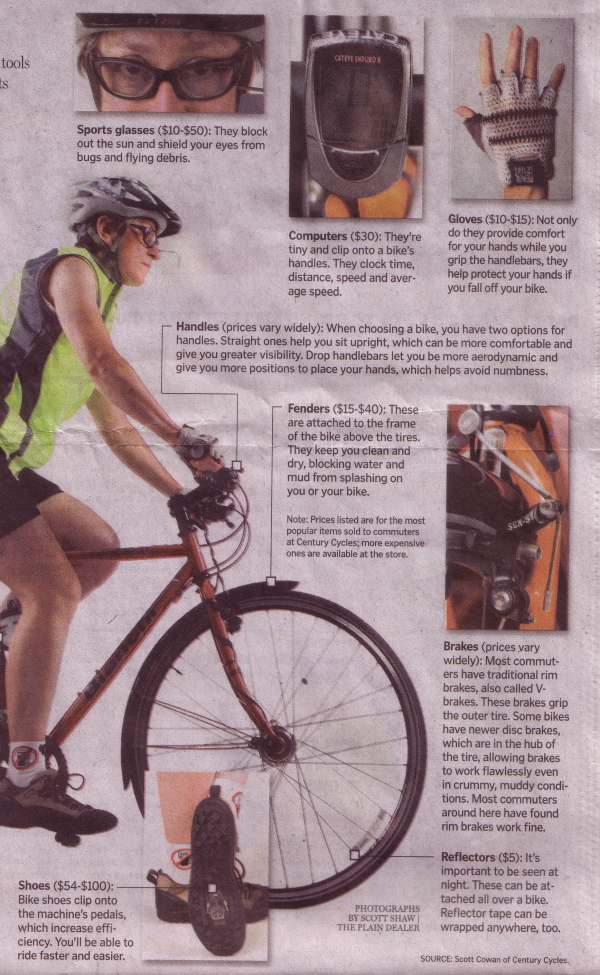 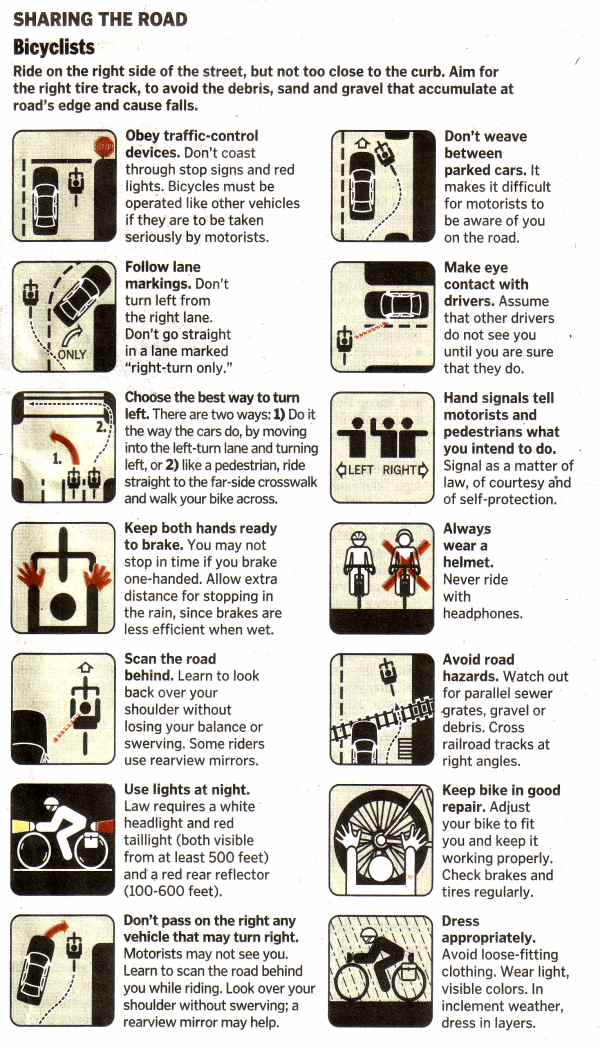 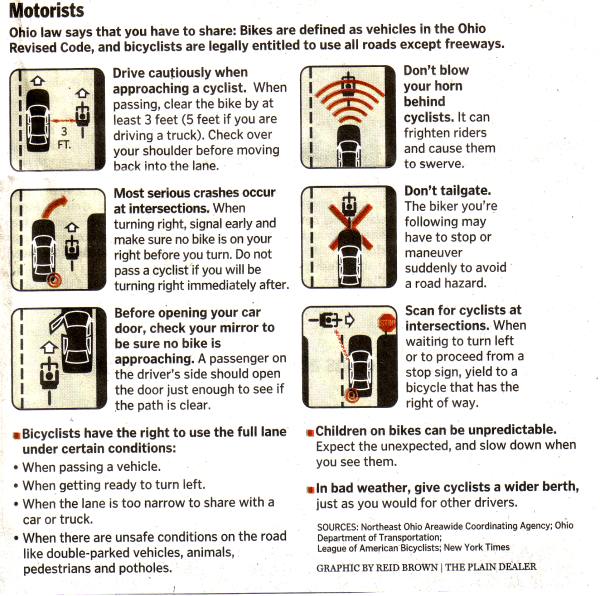 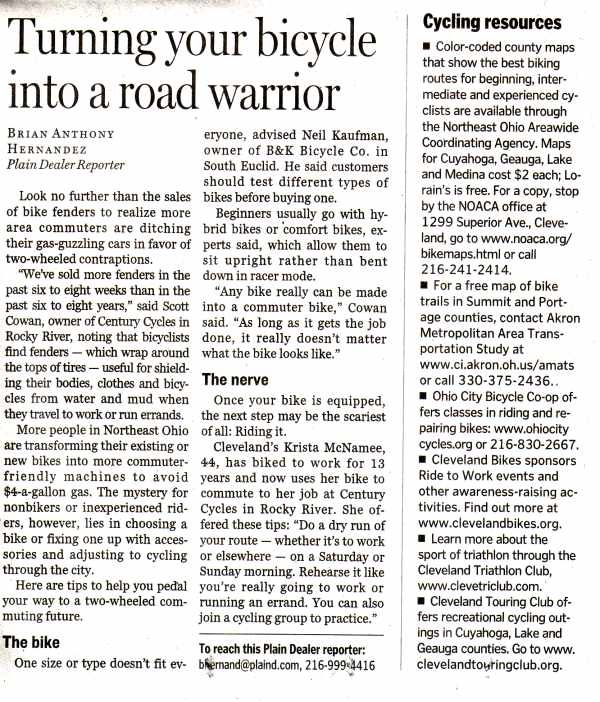 Two-wheeling in a four-wheel world

It's getting ugly out there, as a growing number of bicyclists vie with motorists for a piece of the street.

Drivers don't seem to realize that bicyclists are entitled to the road, too.

"Cars will often come within an inch of your handlebars," said Charles Hicks, 60, a Bay Village bicyclist. He's been "buzzed," or cut off, by many an infuriated driver, and has had strings of obscenities hurled his way.

Blame goes both ways, he said, as inexperienced cyclists trying to save gas money hit the streets. "Adults with young children seem to think they have the right of way. I see them doing ignorant and dangerous things."

Bicyclists, especially novices, should map out a safe course before they roll out. "The route you take in a car isn't the same one you want to take on your bike," said Krista McNamee of Century Cycles. "Choose more residential-type streets to make your trip safer."

Yet the street's the best place to pedal, experts agree. "Cyclists fare best when they act and are treated as drivers of vehicles," said cycling instructor Fred Oswald, who cited several studies showing that cyclists who follow in-street traffic patterns have significantly fewer accidents than those who make up their own rules.

So can't we all just get along? Check out our list of tips on page E4 to help drivers and bicyclists learn to play nice and share the road.

Turning your bicycle into a road warrior

Look no further than the sales of bike fenders to realize more area commuters are ditching their gas-guzzling cars in favor of two-wheeled contraptions.

More people in Northeast Ohio are transforming their existing or new bikes into more commuter-friendly machines to avoid $4-a-gallon gas. The mystery for nonbikers or inexperienced riders, however, lies in choosing a bike or fixing one up with accessories and adjusting to cycling through the city.

Here are tips to help you pedal your way to a two-wheeled commuting future.

One size or type doesn't fit everyone, advised Neil Kaufman, owner of B&K Bicycle Co. in South Euclid. He said customers should test different types of bikes before buying one.

Beginners usually go with hybrid bikes or comfort bikes, experts said, which allow them to sit upright rather than bent down in racer mode.

"Any bike really can be made into a commuter bike," Cowan said. "As long as it gets the job done, it really doesn't matter what the bike looks like."

Once your bike is equipped, the next step may be the scariest of all: Riding it.

Cleveland's Krista McNamee, 44, has biked to work for 13 years and now uses her bike to commute to her job at Century Cycles in Rocky River. She offered these tips: "Do a dry run of your route -- whether it's to work or elsewhere -- on a Saturday or Sunday morning. Rehearse it like you're really going to work or running an errand. You can also join a cycling group to practice."

Color-coded county maps that show the best biking routes for beginning, intermediate and experienced cyclists are available through the Northeast Ohio Areawide Coordinating Agency. Maps for Cuyahoga, Geauga, Lake and Medina cost $2 each; Lorain's is free. For a copy, stop by the NOACA office at 1299 Superior Ave., Cleveland, go to www.noaca.org/bikemaps.html or call 216-241-2414.

For a free map of bike trails in Summit and Portage counties, contact Akron Metropolitan Area Transportation Study at www.ci.akron.oh.us/amats or call 330-375-2436.

Cleveland Bikes sponsors Ride to Work events and other awareness-raising activities. Find out more at www.clevelandbikes.org.

Learn more about the sport of triathlon through the Cleveland Triathlon Club, www.clevetriclub.com.