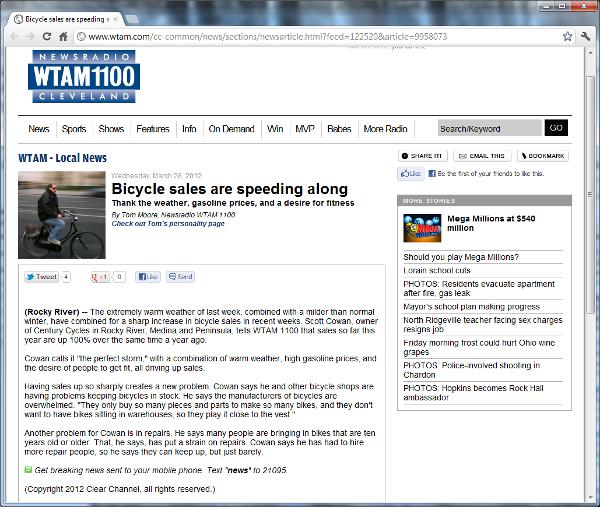 Thank the weather, gasoline prices, and a desire for fitness

(Rocky River) -- The extremely warm weather of last week, combined with a milder than normal winter, have combined for a sharp increase in bicycle sales in recent weeks. Scott Cowan, owner of Century Cycles in Rocky River, Medina and Peninsula, tells WTAM 1100 that sales so far this year are up 100% over the same time a year ago.

Cowan calls it "the perfect storm," with a combination of warm weather, high gasoline prices, and the desire of people to get fit, all driving up sales.

Having sales up so sharply creates a new problem. Cowan says he and other bicycle shops are having problems keeping bicycles in stock. He says the manufacturers of bicycles are overwhelmed. "They only buy so many pieces and parts to make so many bikes, and they don't want to have bikes sitting in warehouses, so they play it close to the vest."

Another problem for Cowan is in repairs. He says many people are bringing in bikes that are ten years old or older. That, he says, has put a strain on repairs. Cowan says he has had to hire more repair people, so he says they can keep up, but just barely.