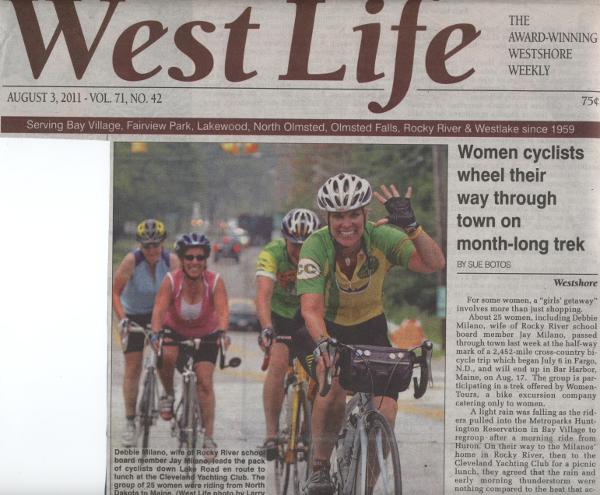 For some women, a "girls' getaway" involved more than just shopping.

About 25 women, including Debbie Milano, wife of Rocky River school board member Jay Milano, passed through town last week at the half-way mark of 2,452-mile cross-country bicycle trip which began July 6 in Fargo, N.D., and will end up in Bar Harbor, Maine, on Aug. 17. The group in participating in a trek offered by WomenTours, a bike excursion company catering only to women.

A light rain was falling as the riders pulled into the Metroparks Huntington Reservation in Bay Village to regroup after a morning ride from Huron. On their way to the Milanos' home in Rocky River, then to the Cleveland Yachting Club for a picnic lunch, they agreed that the rain and early morning thunderstorm were nothing compared to the heat that accompanied most of their ride. "The weather has been brutal," stated one cyclist.

Aside from the weather, some minor mishaps, including flat tires, challenged the group. Milano, who the riders said was often at the front of the pack, pulled in a little later due to her own flat earlier in the day.

Hailing from Hawaii to Vermont, the women came from all walks of life, ranging in age from 38 to almost-73-year-old Janet "Buzz" Bee from Sacramento, Calif. "I always wanted a nickname, so they started calling me 'Buzz,'" she explained.

Many of the women, all seasoned riders, knew each other from prior trips. Milano, a veteran of several other cross-country ventures, said she has not always been a cyclist.

"Five years ago, we sent our youngest to college. We were empty nesters, and I thought about taking up cycling," she recalled. "I started out with a four-day beginner trip and I loved it, so I came home and bought a bike," she added.

Milano said she rides throughout the year, as long as the weather holds, and spends five days a week in the gym during the offseason.

Although the pace of up to 70 miles a day is grueling, the women don't rough it. As part of the package, breakfast, dinners and snacks are provided, as well as nightly lodging. According to the WomenTours website, founder Gloria Smith, 67, has put her time in on the hard ground and appreciates a soft bed and a hot shower after a long day in the saddle.

"We don't camp out," stated one of the riders.

Also included in the trip is the "SAG wagon," which the women explained, stands for Support and Gear. This car accompanies the women carrying water and snacks, for which the riders stop every 20 miles. Even the three SAG Wagon drivers are riders, alternating their time behind the wheel and in the saddle.

The riders said they have a detailed map and itinerary to keep them on track, stopping every so often for a day off. Milano said that the next day would be spent seeing the sights of Cleveland, including the Rock and Roll Hall of Fame and a Lolly the Trolly tour.

During what the riders called the "eastern segment of the norther tier" cross-country ride, they will cycle through 12 states, and visit such destinations as Niagara Falls and Adirondack State Park. The trek will conclude with the riders dipping their tires in the Atlantic Ocean at Acadia State Park in Maine.

Although most of the women were doing for their own enjoyment, some were supporting causes. One bike sported the pink of breast cancer awareness, while Connie O'Connor of Fall Brook, Calif., rode for "Camp Wanna Kura," a program for children who, like herself, have Type I diabetes. A veteran of several "centuries" or 100-mile rides, O'Connnor wore the "Red Rider" jersey she said that fellow diabetic riders use to identify and support one another.

Sherry Schussar from Hawaii was riding for "Hale Kau Kau" or House of Meals, which provides food for the hungry on South Maui. "There is a lot of poverty there that people of unaware of," she said.

As the group headed off, there was one rider in particular who stood out. Scott Cowan, owner of Century Cycles in Rocky River, joined the riders in Huron and was accompanying them on the leg through the city.