Thanks to the WestLife newspaper for mentioning our Century Cycles' Big Adventure Party in the Mar. 9, 2011 edition. You can read the online version here. 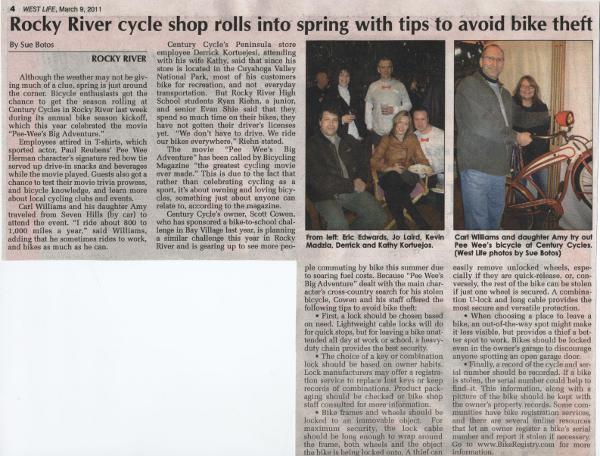 Although the weather may not be giving much of a clue, spring is just around the corner. Bicycle enthusiasts got the chance to get the season rolling at Century Cycles in Rocky River during its annual bike season kickoff, which this year celebrated the movie "Pee-Wee's Big Adventure."

Carl Williams and his daughter Amy traveled from Seven Hills (by car) to attend the event. "I ride about 800 to 1,000 miles a year," said Williams, adding that he sometimes rides to work, and bikes as much as he can.

Century Cycle's Peninsula store employee Derrick [Kortvejesi], attending with his wife Kathy, said that since his store is located in the Cuyahoga Valley National Park, most of his customers bike for recreation, and not everyday transportation. But Rocky River High School students Ryan Riehn, a junior, and senior Evan Shie said that they spend so much time on their bikes, they haven't gotten their driver's licenses yet. "We don't have to drive. We ride our bikes everywhere," Riehn stated.

The movie "Pee-Wee's Big Adventure" has been called by Bicycling Magazine "the greatest cycling movie ever made." This is due to the fact that rather than celebrating cycling as a sport, it's about owning and loving bicycles, something just about anyone can relate to, according to the magazine.

Century Cycle's owner, Scott [Cowan], who has sponsored a bike-to-school challenge in Bay Village last year, is planning a similar challenge this year in Rocky River and is gearing up to see more people commuting by bike this summer due to soarnig fuel costs. Because "Pee-Wee's Big Adventure" dealt with the main character's cross-country search for his stolen bicycle, [Cowan] and his staff offered the following tips to avoid bike theft: