From the "Bay Village Chatter" section by Jeff Gallatin in the June 2, 2010 edition of WestLife: 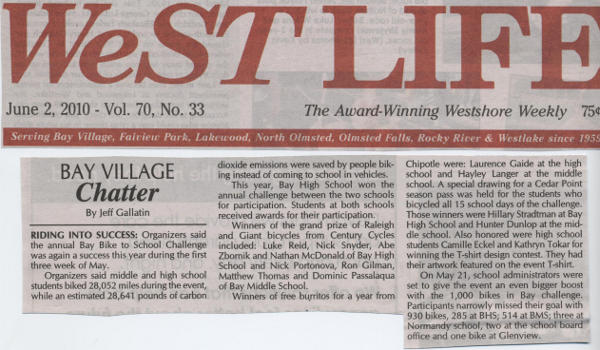 Organizers said the annual Bay Bike to School Challenge was again a success this year during the first three week[s] of May.

Organizers said middle and high school students biked 28,052 miles during the event, while an estimated 28,641 pounds of carbon dioxide emissions were saved by people biking instead of coming to school in vehicles.

This year, Bay High School won the annual challenge between the two schools for participation. Students at both school received awards for their participation.

Winners of free burritos for a year from Chipotel were: Laurence Gaide at the high school and Hayley Langer at the middle school. A special drawing for a Cedar Point season pass was held for the students who bicycled all 15 days of the challenge. Those winners were Hillary Stradtman at Bay High School and Hunter Dunlop at the middle school. Also honored were high school students Camille Eckel and Kathryn Tokar for winning the T-shirt design contest. They had their artwork featured on the event T-shirt.

On May 21, school administrators were set to give the event an even bigger boost with the 1,000 bike in Bay challenge. Participants narrowly missed their goal with 930 bikes, 285 at BHS; 514 at BMS; three at Normandy School, two at the school board office and one bike at Glenview.