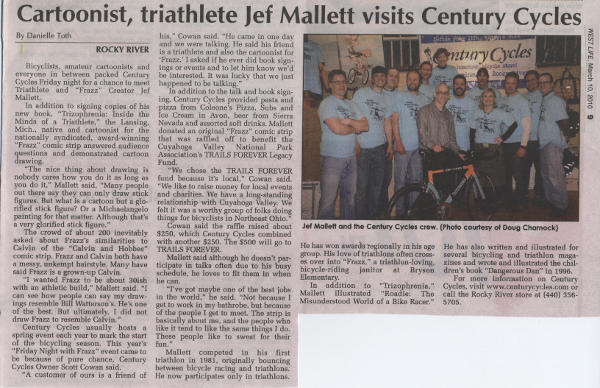 Bicyclists, amateur cartoonists and everyone in between packed Century Cycles Friday night for a chance to meet Triathlete and "Frazz" Creator Jef Mallett.

In addition to signing copies of his new book, "Trizophrenia: Inside the Minds of a Triathlete," the Lansing, Mich., native and cartoonist for the nationally syndicated, award-winning "Frazz" comic strip answered audience questions and demonstrated cartoon drawing.

The crowd of about 200 inevitably asked about Frazz's similarities to Calvin of the "Calvin and Hobbes" comic strip. Frazz and Calvin both have a messy, unkempt hairstyle. Many have said Frazz is a grown-up Calvin.

"I wanted Frazz to be about 30ish with an athletic build," Mallett said. "I can see how people can say my drawings resemble Bill Watterson's. He's one of the best. But ultimately, I did not draw Frazz to resemble Calvin."

Century Cycles usually hosts a spring event each year to mark the start of the bicycling season. This year's "Friday Night with Frazz" event came to be because of pure chance, Century Cycles Owner Scott Cowan said.

"A customer of our is a friend of his," Cowan said. "He came in one day and we were talking. He said his friend is a triathlete and also the cartoonist for 'Frazz.' I asked if he ever did book signings or events and to let him know we'd be interested. It was lucky that we just happened to be talking.

"We chose the TRAILS FOREVER fund because it's local," Cowan said. "We like to raise money for local events and charities. We have a long-standing relationship with Cuyahoga Valley. We felt it was a worthy group of folks doing things for bicyclists in Northeast Ohio."

Cowan said the raffle raised about $250, which Century Cycles combined with another $250. The $500 will go to TRAILS FOREVER.

Mallett said although he doesn't participate in talks often due to his busy schedule, he loves to fit them in when he can.

"I've got maybe one of the best jobs in the world," he said. "Not because I get to work in my bathrobe, but because of the people I get to meet. The strip is basically about me, and the people who like it tend to like the same things I do. These people like to sweat for their fun."

Mallett competed in his first triathlon in 1981, originally bouncing between bicycle racing and triathlons. He now participates only in triathlons. He has won awards regionally in his age group. His love of triathlons often crosses over into "Frazz," a triathlon-loving, bicycle-riding janitor at Bryson Elementary.

In addition to "Trizophrenia," Mallett illustrated "Roadie: The Misunderstood Wordl of a Bike Racer." He has also written and illustrated for several bicycling and triathlon magazines and wrote and illustrated the children's book "Dangerous Dan" in 1996.

For more information on Century Cycles, visit www.centurycycles.com or call the Rocky River store at (440) 356-5705.