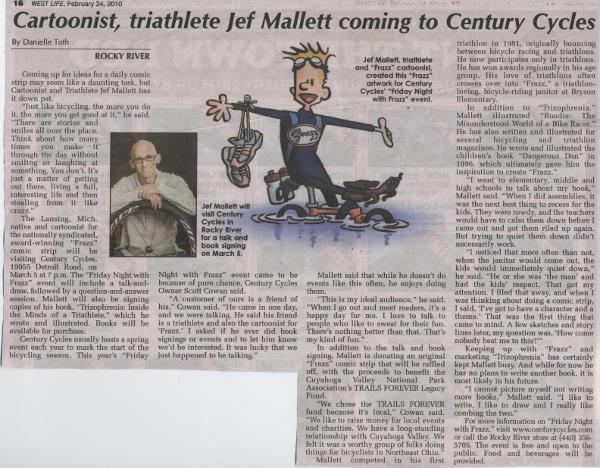 Coming up with ideas for a daily comic strip may seem like a daunting task, but Cartoonist and Triathlete Jef Mallett has it down pat.

"Just like bicycling, the more you do it, the more you get good at it," he said. "There are stories and smiles all over the place. Think about how many times you make it through the day without smiling or laughing at something. You don't. It's just a matter of getting out there, living a full, interesting life and then stealing from it like crazy."

The Lansing, Michigan native and cartoonist for the nationally syndicated, award-winning "Frazz" cartoon strip will be visiting Century Cycles, 19955 Detroit Road, on March 5 at 7 p.m. The "Friday Night with Frazz" event will include a talk-and-draw, followed by a question-and-answer session. Mallett will also be signing copies of his book, "Trizophrenia: Inside the Minds of a Triathlete," which he wrote and illustrated. Books will be available for purchase.

Century Cycles usually hosts a spring event each year to mark the start of the bicycling season. This year's "Friday Night with Frazz" event came to be because of pure chance, Century Cycles Owner Scott Cowan said.

"A customer of ours is a friend of his," Cowan said. "He came in one day, and we were talking. He said his friend is a triathlete and also the cartoonist for 'Frazz.' I asked if he ever did book signings or events and to let him know we'd be interested. It was lucky that we just happened to be talking."

Mallett said that while he doesn't do events like this often, he enjoys doing them.

"This is my ideal audience," he said. "When I go out and meet readers, it's a happy day for me. I love to talk to people who like to sweat for their fun. There's nothing better than that. That's my kind of fun."

In addition to the talk and book signing, Mallett is is donating an original "Frazz" comic strip that will be raffled off, with the proceeds to benefit the Cuyahoga Valley National Park Association's TRAILS FOREVER Legacy Fund.

"We chose the TRAILS FOREVER fund because it's local," Cowan said. "We like to raise money for local events and charities. We have a long-standing relationship with Cuyahoga Valley. We felt it was a worthy group of folks doing things for bicyclists in Northeast Ohio."

Mallett competed in his first triathlon in 1981, originally bouncing between bicycle racing and triathlons. He now participates only in triathlons. He has won awards regionally in his age group. His love of triathlons often crosses over into "Frazz," a triathlon-loving, bicycle-riding janitor at Bryson Elementary.

In addition to "Trizophrenia," Mallett illustrated "Roadie: The Misunderstood World of a Bike Racer." He has also written and illustrated for several bicycling and triathlon magazines. He wrote and illustrated the children's book "Dangerous Dan" in 1996, which ultimately gave him the inspiration to create "Frazz."

"I went to elementary, middle and high schools to talk about my book," Mallett said. "When I did assemblies, it was the next best thing to recess for the kids. They were rowdy, and the teachers would have to calm them down before I came out and got them riled up again. But trying to quiet them down didn't necessarily work.

"I noticed that more often than not, when the janitor would come out, the kids would immediately quiet down," he said. "He or she was 'the man' and had the kids' respect. That got my attention. I filed that away, and when I was thinking about doing a comic strip, I said, 'I've got to have a character and a theme.' That was the first thing that came to mind. A few sketches and story lines later, my question was, 'How come nobody beat me to this?'"

Keeping up with "Frazz" and marketing "Trizophrenia" has certainly kept Mallett busy. And while for now he has no plans to write another book, it is most likely in his future.

For more information on "Friday Night with Frazz," visit www.centurycycles.com or call the Rocky River store at (440) 356-5705. The event is free and open to the public. Food and beverages will be provided.