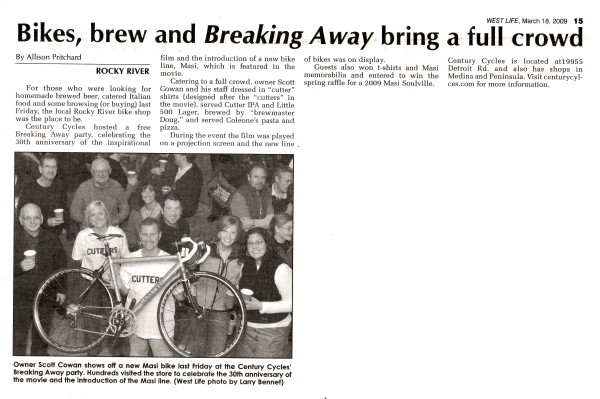 Bikes, brew, and Breaking Away bring a full crowd

For those who were looking for homemade brewed beer, catered Italian food and some browsing (or buying) last Friday, the local Rocky River bike shop was the place to be.

Century Cycles hosted a free Breaking Away party, celebrating the 30th anniversary of the inspirational film and the introduction of a new bike line, Masi, which is featured in the movie.

Catering to a full crowd, owner Scott Cowan and his staff dressed in "cutter" shirts (designed after the "cutters" in the movie), served Cutter IPA and Little 500 Lager, brewed by "brewmaster Doug," and served Coleone's pasta and pizza.

During the event the film was played on a projection screen and the new line of bikes was on display.

Guests also won t-shirts and Masi memorabilia and entered to win the spring raffle for a 2009 Masi Soulville.

Century Cycles is located at 19955 Detroit Rd. adn also has shops in Medina and Peninsula. Visit centurycycles.com for more information.