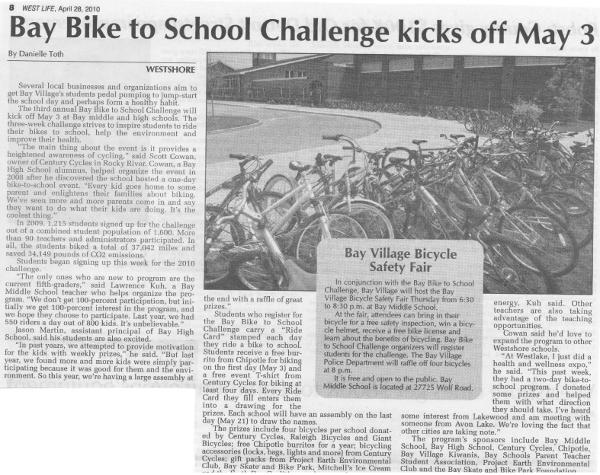 The third annual Bay Bike to School Challenge will kick off May 3 at Bay middle and high schools. The three-week challenge strives to inspire students to ride their bikes to school, help the environment and improve their health.

"The main thing about the event is it provides a heightened awareness of cycling," said Scott Cowan, owner of Century Cycles in Rocky River. Cowan, a Bay High School alumnus, helped organize the event in 2008 after he discovered the school hosted a one-day bike-to-school event. "Every kid goes home to some parent and enlightens their families about biking. We've seen more and more parents come in and say they want to do what their kids are doing. It's the coolest thing."

Students began signing up this week for the 2010 challenge.

"The only ones who are new to program are the current fifth-graders," said Lawrence Kuh, a Bay Middle School teacher who helps organize the program. "We don't get 100-percent participation, but initially we get 100-percent interest in the program, and we hope they choose to participate. Last year, we had 550 riders a day out of 800 kids. It's unbelievable."

"In past years, we attempted to provide motivation for the kids with weekly prizes," he said. "But last year, we found more and more kids were simply participating because it was good fro them and the environment. So this year, we're have a large assembly at the end with a raffle of great prizes."

Students who register for the Bay Bike to School Challenge carry a "Ride Card" stamped each day they ride a bike to school. Students receive a free burrito from Chipotle for biking on the firt day (May 3) and a free event T-shirt from Century Cycles for biking at least four days. Every Ride Card they fill enters them into a drawing for the prizes. Each school will have an assembly on the last day (May 21) to draw the names.

energy, Kuh said. Other teachers are also taking advantage of the teaching opportunities.

"Cowan said he'd love to expand the program to other Westshore schools.

"At Westlake, I just did a health and wellness expo," he said. "This past week, they had a two-day bike-to-school program. I donated some prizes and helped them with what direction they should take. I've heard some interest from Lakewood and am meeting with someone from Avon Lake. We're loving the fact that other cities are taking note."

In conjunction with the Bay Bike to School Challenge, Bay Village will host the Bay Village Bicycle Safety Fair Thursday from 6:30 to 8:30 p.m. at Bay Middle School.

At the fair, attendees can bring in their bicycle for a free safety inspection, win a bicycle helmet, receive a free bike license and learn about the benefits of bicycling. Bay Bike to School Challenge organizers will register students for the challenge. The Bay Village Police Department will raffle off four bicycles at 6 p.m.

It is free and open to the public. Bay Middle School is located at 27725 Wolf Road.