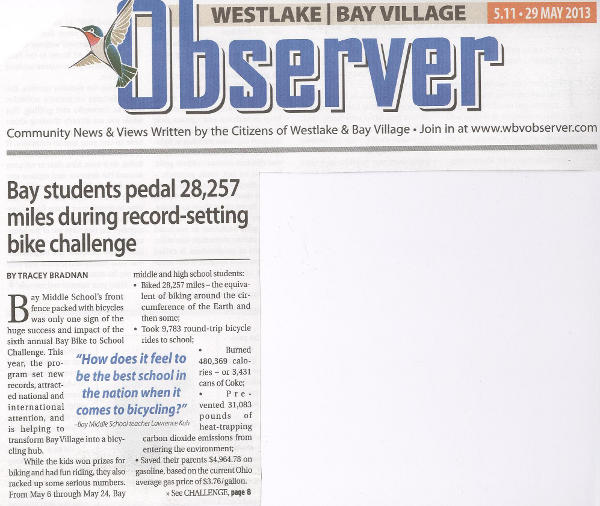 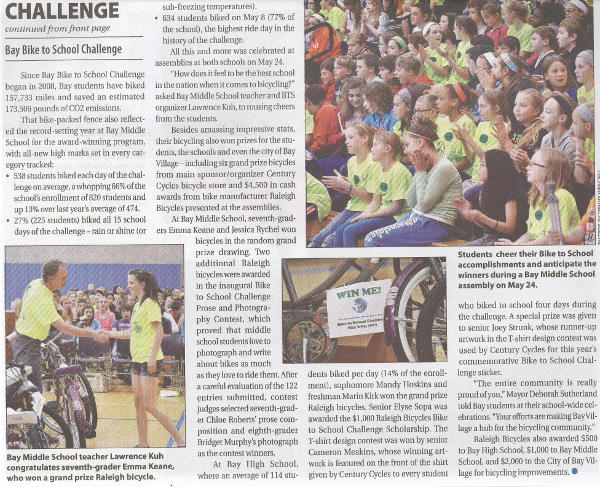 Bay Middle School's front fence packed with bicycles was only one sign of the huge success and impact of the sixth annual Bay Bike to School Challenge. This year, the program set new records, attracted national and international attention, and is helping to transform Bay Village into a bicycling hub.

While the kids won prizes for biking and had fun riding, they also racked up some serious numbers. From May 6 through May 24, Bay middle and high school students:

That bike-packed fence also reflected the record-setting year at Bay Middle School for the award-winning program, with all-new high marks set in every category tracked:

All this and more was celebrated at assemblies at both schools on May 24.

"How does it feel to be the best school in the nation when it comes to bicyclign?" asked Bay Middle School teacher and BTS organizer Lawrence Kuh, to rousing cheers from the students.

Besides amassing impressive stats, their bicycling also won prizes for the students, the schools and even the city of Bay Village - including six grand prize bicycles from the main sponsor/organizer Century Cycles bicycle store and $4,500 in cash award from bike manufacturer Raleigh Bicycles presented at the assemblies.

At Bay Middle School, seventh-graders Emma Keane and Jessica Rychel won bicycles in the random grand prize drawing. Two additional Raleigh bicycles were awarded in the inaugural Bike to School Challenge Prose and Photography Contest, which proved that middle school students love to photograph and write about bikes as much as they love to ride them. After a careful evaluation of the 122 entries submitted, contest judges selected seventh-grader Chloe Roberts' prose compostion and eighth-grader Bridge Murphy's photograph as the contest winners.

At Bay High School, where an everage of 114 students biked per day (14% of the enrollment), sophomore Mandy Hoskins and freshman Marin Kirk won the grand prize Raleigh bicycles. Senior Elyse Sopa was awarded the $1,000 Raleigh Bicycles Bike to School Challenge Scholarshiop. The T-shirt design contest was won by senior Cameron Meakins, whose winning artwork is featured on the front of the shirt given by Century Cycles to every student who biked to school four days during the challenge. A special prize was given to senior Joey Strunk, whose runner-up artwork in the T-shrt design contest was used by Century Cycles for this year's commemorative Bike to School Challenge sticker.

"The entire community is really proud of you," Mayor Deborah Sutherland told Bay students at their school-wide celebrations. "Your efforts are making Bay Village a hub for the bicycling community."

Raleigh Bicycles also awarded $500 to Bay High School, $1,000 to Bay Middle School, and $2,000 to the City of Bay Village for bicycling improvements.