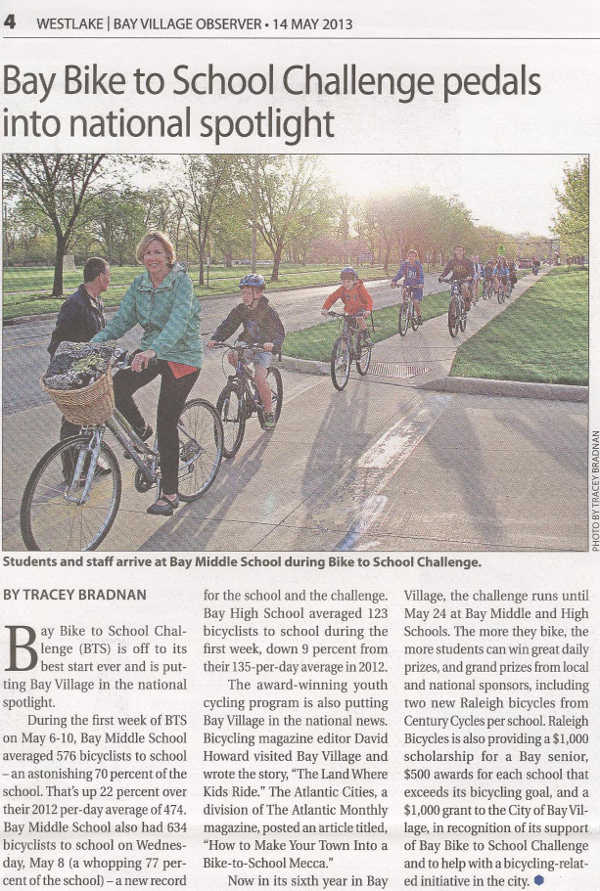 Bay Bike to School Challenge (BTS) is off to its best start ever and is putting Bay Village in the national spotlight.

The award-winning youth cycling program is also putting Bay Village in the national news. Bicycling magazine editor David Howard visited Bay Village and wrote the story, "The Land Where Kids Ride." The Atlantic Cities, a division of The Atlantic Montly magazine, posted an article titled, "How to Make Your Town Into a Bike-to-School Mecca."

Now in its sixth year in Bay Village, the challenge runs until May 24 at Bay Middle and High Schools. The more they bike, the more students can win great daily prizes, and grand prizes from local and national sponsors, including two new Raleigh bicycles from Century Cycles per school. Raleigh Bicycles is also providing a $1,000 scholarship for a Bay senior, $500 awards for each school that exceeds its bicycling goal, and a $1,000 grant to the City of Bay Village, in recognition of its support of Bay Bike to School Challenge and to help with a bicycling-related initiative in the city.