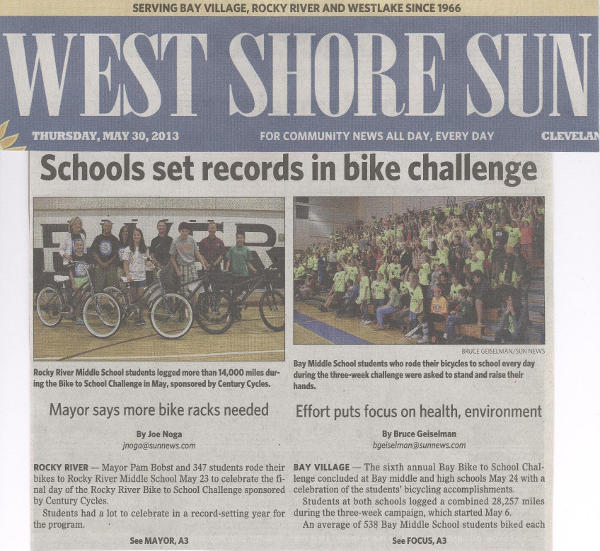 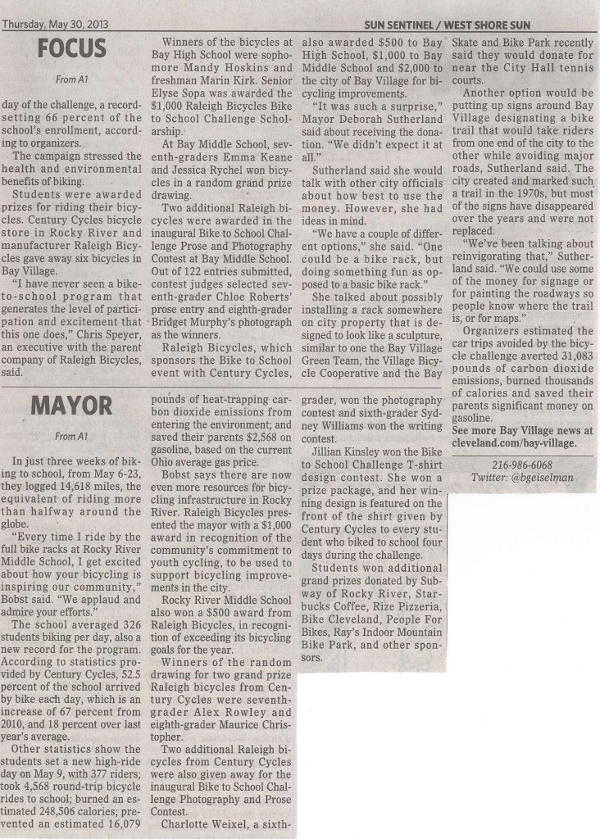 ROCKY RIVER - Mayor Pam Bobst and 347 students rode their bikes to Rocky River Middle School May 23 to celebrate the final day of the Rocky River Bike to School Challenge sponsored by Century Cycles.

Students had a lot to celebrate in a record-setting year for the program.

In just three weeks of biking to school, from May 6-23, they logged 14,618 miles, the equivalent of riding more than halfway around the globe.

"Every time I ride by the full bike racks at Rocky River Middle School, I get excited about how your bicycling is inspiring our community," Bobst said "We applaud and admire your efforts."

The school averaged 326 students biking per day, also a new record for the program. According to statistics provide by Century Cycles, 52.5 percent of the school arrived by bike each day, which is an increase of 67 percent from 2010, and 18 percent over last year's average.

Other statistics show the students set a new high-ride day on May 9, with 377 riders; took 4,568 round-rip bicycle rides to school; burned an estimated 248,506 calories; prevented an estimated 16,079 pounds of heat-trapping carbon dioxide emissions from entering the environment; and saved their parents $2,568 on gasoline, based on the current Ohio average gas price.

Bobst says there are now even more resources for bicycling infrastructure in Rocky River. Raleigh Bicycles presented the mayor with a $1,000 award in recognition of the community's commitment to youth cycling, to be used to support bicycling improvements in the city.

Rocky River Middle School also won a $500 award from Raleigh Bicycles, in recognition of exceeding its bicycling goals for the year.

Two additional Raleigh bicycles from Century Cycles were also given away for the inaugural Bike to School Challenge Photography and Prose Contest.

Jillian Kinsley won the Bike to School Challenge T-shirt design contest. She won a prize package, and her winning design is featured on the front of the shirt given by Century Cycles to every student who biked to school four days during the challenge.

BAY VILLAGE - The sixth annual Bay Bike to School Challenge concluded at Bay middle and high schools May 24 with a celebration of the students' bicycling accomplishments.

Students at both schools logged a combined 28,257 miles during the three-week campaign, which started May 6.

An average of 538 Bay Middle School students biked each day of the challenge, a record-setting 66 percent of the school's enrollment, according to organizers.

The campaign stressed the health and environmental benefits of biking.

"I have never seen a bike-to-school program that generates the level of participation and excitement that this one does," Chris Speyer, an executive with the parent company of Raleigh Bicycles, said.

Raleigh Bicycles, which sponsors the Bike to School event with Century Cycles, also awarded $500 to Bay High School, $1,000 to Bay Middle School and $2,000 to the city of Bay Village for bicycling improvements.

"It was such a surprise," Mayor Deborah Sutherland said about receiving the donation. "We didn't expect it at all."

Sutherland said she would talk with other city officials about how best to use the money. However, she had ideas in mind.

"We have a couple of different options," she said. "One could be a bike rack, but doing something fun as opposed to a basic bike rack."

She talked about possibly installing a rack somewhere on city property that is designed to look like a sculpture, similar to one the Bay Village Green Team, the Village Bicycle Cooperative and the Bay Skate and Bike Park recently said they would donate for near the City Hall tennis courts.

Another option would be putting up signs around Bay Village designating a bike trail that would take riders from one end of the city to the while avoiding major roads, Sutherland said. The city created and marked such a trail in the 1970s, but most of the signs have disappeared over the years and were not replaced.

"We've been talking about reinvigorating that," Sutherland said." We could use some of the money for signage or for painting the roadways so people know where the trail is, or for maps."