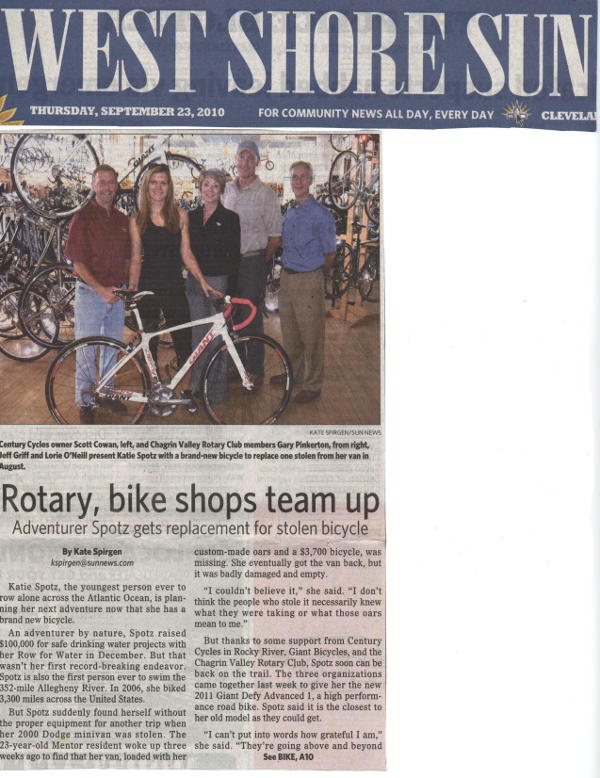 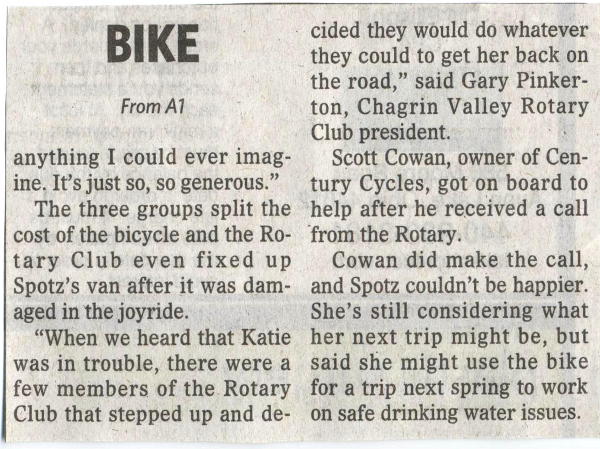 Katie Spotz, the youngest person ever to row alone across the Atlantic Ocean, is planning her next adventure now that she has a brand new bicycle.

An adventurer by nature, Spotz raised $100,000 for safe drinking water projects with her Row for Water in December. But that wasn't her first record-breaking endeavor. Spotz is also the first person ever to swim the 352-mile Allegheny River. In 2006, she biked 3,300 miles across the United States.

But Spotz suddenly found herself without the proper equipment for another trip when her 2000 Dodge minivan was stolen. The 23-year-old Mentor resident woke up three weeks ago to find that her van, loaded with her custom-made oars and a $3,700 bicycle, was missing. She eventually got the van back, but it was badly damaged and empty.

"I couldn't believe it," she said. "I don't think the people who stole it necessarily knew what they were taking or what those oars mean to me."

But thanks to some support from Century Cycles in Rocky River, Giant Bicycles, and the Chagrin Valley Rotary Club, Spotz soon can be back on the trail. The three organizations came together last week to give her the new 2011 Giant Defy Advanced 1, a high-performance road bike. Spotz said it is the closest to her old model as they could get.

"I can't put into words how grateful I am," she said. "They're going above and beyond anything I could ever imagine. It's just so, so generous."

The three groups split the cost of the bicycle and the Rotary Club even fixed up Spotz's van after it was damaged in the joyride.

"When we heard that Katie was in trouble, there were a few members of the Rotary Club that stepped up and decided they would do whatever they could to get her back on the road," said Gary Pinkerton, Chagrin Valley Rotary Club president.

Scott Cowan, owner of Century Cycles, got on board to help after he received a call from the Rotary.

Cowan did make the call, and Spotz couldn't be happier. She's still considering what her next trip might be, but said she might use the bike for a trip next spring to work on safe drinking water issues.