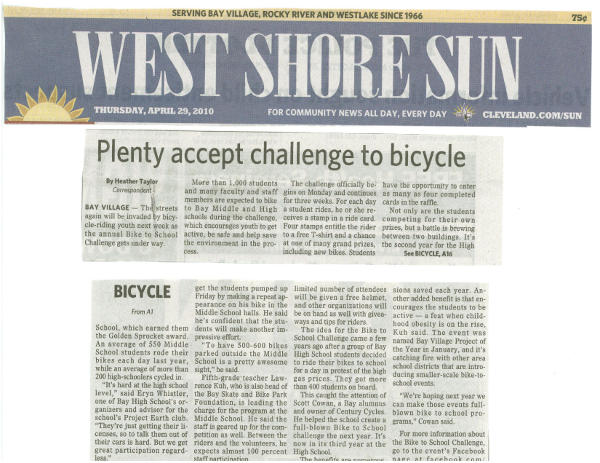 BAY VILLAGE - The streets again will be invaded by bicycle-riding youth next week as the annual Bike to School Challenge gets under way.

More than 1,000 students and many faculty and staff members are expected to bike to Bay Middle and High schools during the challenge, which encourages youth to get active, be safe and help save the environment in the process.

The challenge officially begins on Monday and continues for three weeks. For each day a student rides, he or she receives a stamp in a ride card. Four stamps entitle the rider to a free T-shirt and a chance at noe of many grand prizes, including new bikes. Students have the opportunity to enter as many as four completed cards in the raffle.

Not only are the students competing for their own prizes, but a battle is brewing betwen two buildings. It's the second year for the High School, which earned them the Golden Sprocket award. An average of 550 Middle School students rode their bikes each day last year, while an average of more than 200 high-schoolers cycled in.

"It's hard at the high school level," said Eryn Whister, one of Bay High School's organizers and advisor for the school's Project Earth club. "They're just getting their licenses, so to talk them out of their cars is hard. But we get great participation regardless."

get the students pumped up Friday by making a repeat appearance on his bike in the Middle School halls. He said he's confident that the students will make another impressive effort.

"To have 500-600 bikes parked outside the Middle School is a pretty awesome sight," he said.

Fifth-grade teacher Lawrence Kuh, who is also head of the Bay Skate and Bike Park Foundation, is leading the charge for the program at the Middle School. He said the staff is geared up for the competition as well. Between the riders and the volunteers, he expects almost 100 percent staff participation.

limited number of attendees will be given a free helmet, and other organizations will be on hand as well with giveaways and tips for riders.

The idea for the Bike to School Challenge came a few year ago after a group of Bay High School students decided to ride their bikes to school for a day in protest of high gas prices. They got more than 400 students on board.

This caught the attention of Scott Cowan, a Bay alumnus and owner of Century Cycles. He helped the school create a full-blown Bike to School challenge the next year. It's now in its third year at the High School.

The benefits are numerous

emissions saved each year. Another added benefit is that encourages the students to be active -- a feat when childhood obesity is on the rise, Kuh said. The event was named Bay Village Project of the Year in January, and it's catching fire with other area school districts that are introducing smaller-scale bike-to-school events.

"We're hoping next year we can make those events full-blown bike to school programs," Cowan said.

For more information about the Bike to School Challenge, go to the event's Facebook page at facebook.com/BayBikeToSchoolChallenge