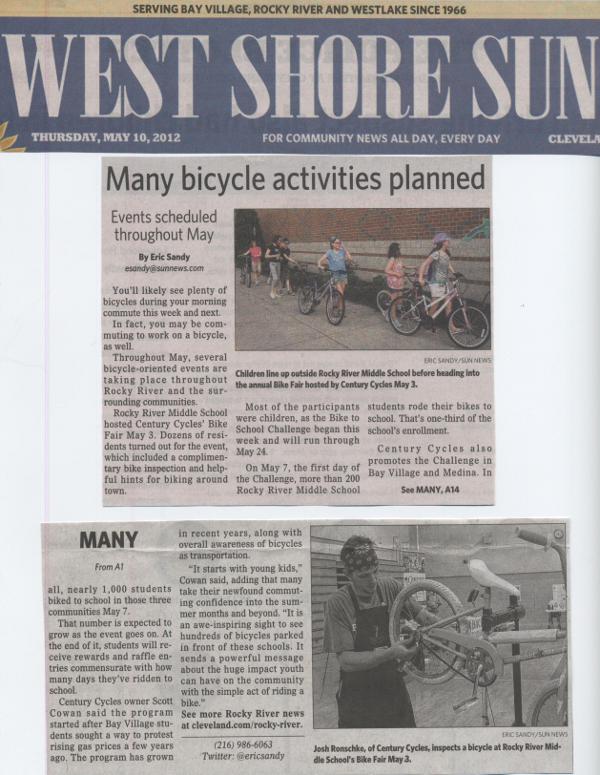 Events scheduled throughout May

You'll likely see plenty of bicycles during your morning commute this week and next.

In fact, you may be commuting to work on a bicycle, as well.

Throughout May, several bicycle-oriented events are taking place throughout Rocky River and the surrounding communities.

Rocky River Middle School hosted Century Cycles' Bike Fair May 3. Dozens of residents turned out for the event, which included a complimentary bike inspection and helpful hints for biking around town.

Most of the participants were children, as the Bike to School Challenge began this week and will run through May 24.

On May 7, the first day of the Challenge, more than 200 Rocky River Middle School students rode their bikes to school. That's one-third of the school's enrollment.

Century Cycles also promotes the Challenge in Bay Village and Medina. In all, nearly 1,000 students bikes to school in those three communities May 7.

That number is expected to grow as the event goes on. At the end of it, students will receive rewards and raffle entries commensurate with how many days they've ridden to school.

Century Cycles owner Scott Cowan said the program after Bay Village students sought a way to protest rising gas prices a few years ago. The program has grown in recent years, along with overall awareness of bicycles as transportation.

"It starts with young kids," Cowan said, adding that many take their newfound commuting confidence into the summer months and beyond. "It is an awe-inspiring sight to see hundreds of bicycles parked in front of these schools. It sends a powerful message about the huge impact youth can have on the community with the simple act of riding a bike."