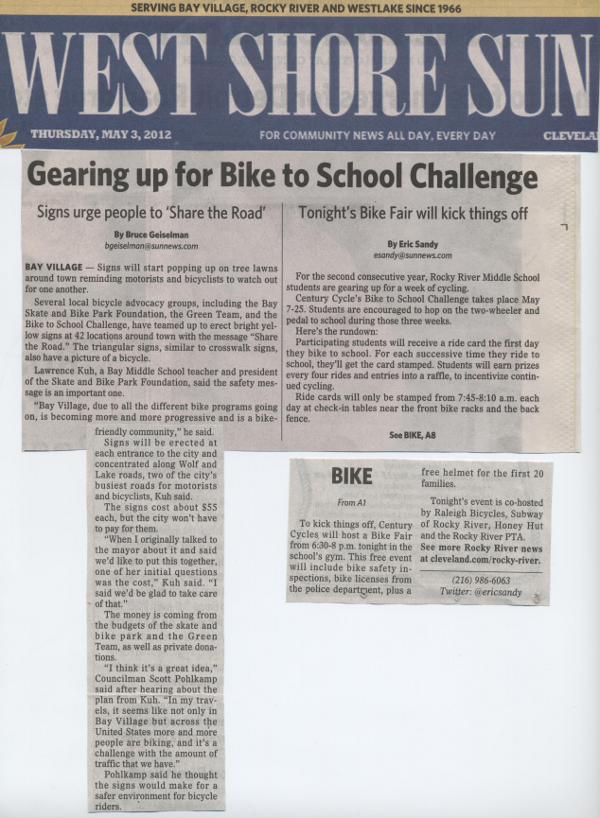 BAY VILLAGE - Signs will start popping up on tree lawns around town reminding motorists and bicyclists to watch out for one another.

Several local bicycle advocacy groups, including the Bay Village Skate and Bike Park Foundation, the Green Team, and the Bike to School Challenge, have teamed up to erect bright yellow signs at 42 locations around town with the message "Share the Road." The triangular signs, similar to crosswalk signs, also have a picture of a bicycle.

Lawrence Kuh, a Bay Middle School teacher and president of the Skate and Bike Park Foundation, said the safety message is an important one.

"Bay Village, due to all the different bike programs going on, is becoming more and more progressive and is a bike-friendly community," he said.

Signs will be erected at each entrance to the city and concentrated along Wolf and Lake roads, two of the city's busiest roads for motorists and bicyclists, Kuh said.

The signs cost about $55 each, but the city won't have to pay for them.

"When I originally talked to the mayor about it and said we'd like to put this together, one of their initial questions was the cost," Kuh said. "I said we'd be glad to take care of that."

The money is coming from the budgets of the skate and bike park and the Green Team, as well as private donations.

"I think it's a great idea," Councilman Scott Pohlkamp said after hearing about the plan from Kuh. "In my travels, it seems like not only in Bay Village but across the United States more and more people are biking, and it's a challenge with the amount of traffic that we have."

Pohlkamp said he thought the signs would make for a safer environment for bicycle riders.

For the second consecutive year, Rocky River Middle School students are gearing up for a week of cycling.

Century Cycle's Bike to School Challenge takes place May 7-25. Students are encouraged to hop on the two-wheeler and pedal to school during those three weeks.

Participating students will receive a ride card the first day they bike to school. For each successive time they ride to school, they'll get the card stamped. Students will earn prizes every four rides and entries into a raffle, to incentivize continued cycling.

Ride cards will only be stamped from 7:45-8:10 a.m. each day at check-in tables near the front bike racks and the back fence.

To kick things off, Century Cycles will host a Bike Fair from 6:30-8:00 p.m. tonight in the school's gym. This free event will include bike safety inspections, bike licenses from the police department, plus a free helmet for the first 20 families.