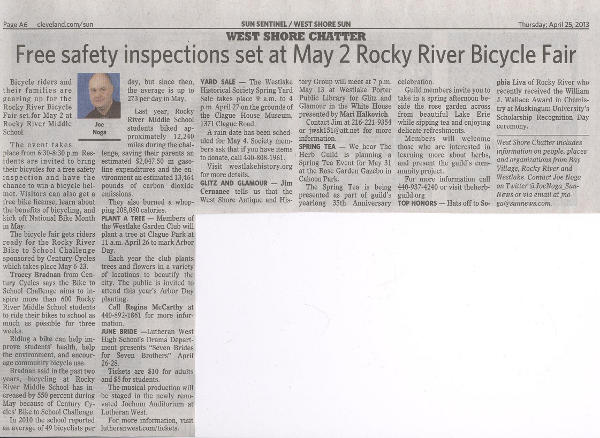 Bicycle riders and their families are gearing up for the Rocky River Bicycle Fair set for May 2 at Rocky River Middle School.

The event takes place from 6:30-8:30 p.m. Residents are invited to bring their bicycles for a free safety inspection and have the chance to win a bicycle helmet. Visitors can also get a free bike license, learn about the benefits of bicycling, and kick off National Bike Month in May.

The bicycle fair gets riders ready for the Rocky River Bike to School Challenge sponsored by Century Cycles which takes place May 6-23.

Tracey Bradnan from Century Cycles says the Bike to School Challange aims to inspire more than 600 Rocky River Middle School students to ride their bikes to school as much as possible for three weeks.

Riding a bike can help improve students' health, help the environment, and encourage community bicycle use.

Bradnan said in the past two years, bicycling at Rocky River Middle School has increased by 550 percent during May because of Century Cycles' Bike to School Challenge.

In 2010 the school reported an average of 49 bicyclists per day, but since then, the average is up to 273 per day in May.