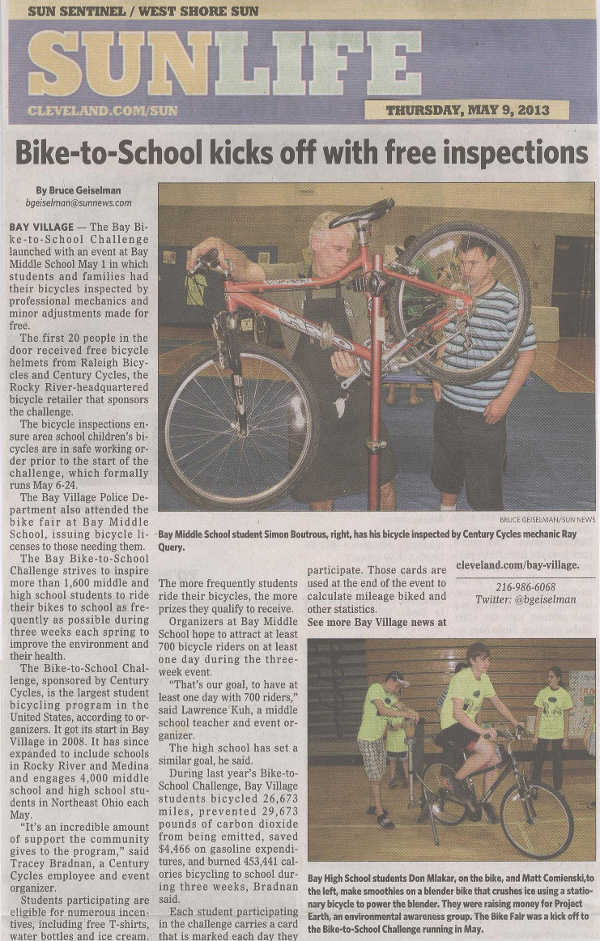 BAY VILLAGE -- The Bay Bike-to-School Challenge launched with an event at Bay Middle School May 1 in which students and families had their bicycle inspected by professional mechanics and minor adjustments made for free.

The first 20 people in the door received free bicycle helmets from Raleigh Bicycles and Century Cycles, the Rocky River-headquartered bicycle retailer that sponsors the challenge.

The bicycle inspections ensure area school children's bicycle are in safe working order prior to the start of the challenge, which formally runs May 6-24.

The Bay Bike-to-School Challenge strives to inspire more than 1,600 middel and high school students to ride their bikes to school as frequently as possible during three weeks each spring to improve the environment and their health.

The Bike-to-School Challenge, sponsored by Century Cycles, is the largest student bicycling program in the United States, according to organizers. It got its start in Bay Village in 2008. It has since expanded to include schools in Rocky River and Medina and engages 4,000 middle school and high school students in Northeast Ohio each May.

"It's an incredible amount of support the community gives to the program," said Tracey Bradnan, a Century Cycles employee and event organizer.

Students participating are eligible for numerous incentives, including free T-shirts, water bottles and ice cream. The more frequently students ride their bicycles, the more prizes they qualify to receive.

Organizers at Bay Middle School hope to attract at least 700 bicycle riders on at least one day during the three-week event.

"That our goal, to have at least one day with 700 riders," said Lawrence Kuh, a middle school teacher and event organizer.

The high school has set a similar goal, he said.

Each student participating in the challenge carries a card that is marked each day they particpate. Those cards are used at the end of the event to calculate mileage biked and other statistics.