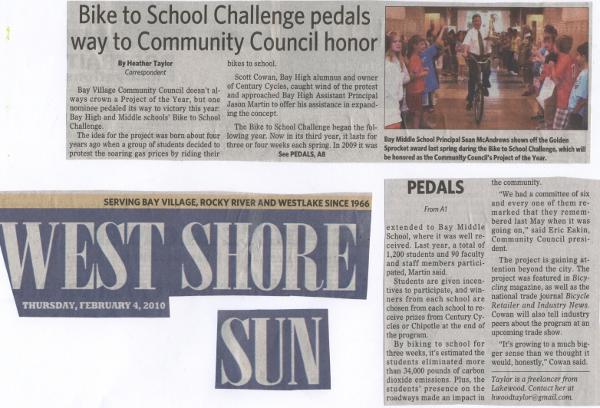 Bay Village Community Council doesn't always crown a Project of the Year, but one nominee pedaled its way to victory this year: Bay High and Middle schools' Bike to School Challenge.

The idea for the project was born about four years ago when a group of students decided to protest the soaring gas prices by riding their bikes to school.

The Bike to School Challenge began the following year. Now in its third year, it lasts for three or four weeks each spring. In 2009 it was extended to Bay Middle School, where it was well received.
Last year, a total of 1,200 students and 90 faculty and staff members participated, Martin said.

By biking to school for three weeks, it's estimated the students eliminated more than 34,000 pounds of carbon dioxide emissions. Plus, the students' presence on the roadways made an impact in the community.

"We had a committee of six and every one of them remarked that they remembered last May when it was going on," said Eric Eakin, Community Council president.

The project is gaining attention beyond the city. The project was featured in Bicycling magazine, as well as the national trade journal Bicycle Retailer and Industry News. Cowan will also tell industry peers about the program at an upcoming trade show.

"It's growing to a much bigger sense than we thought it would, honestly," Cowan said.

Taylor is a freelancer from Lakewood. Contact her at hwoodtaylor@gmail.com.