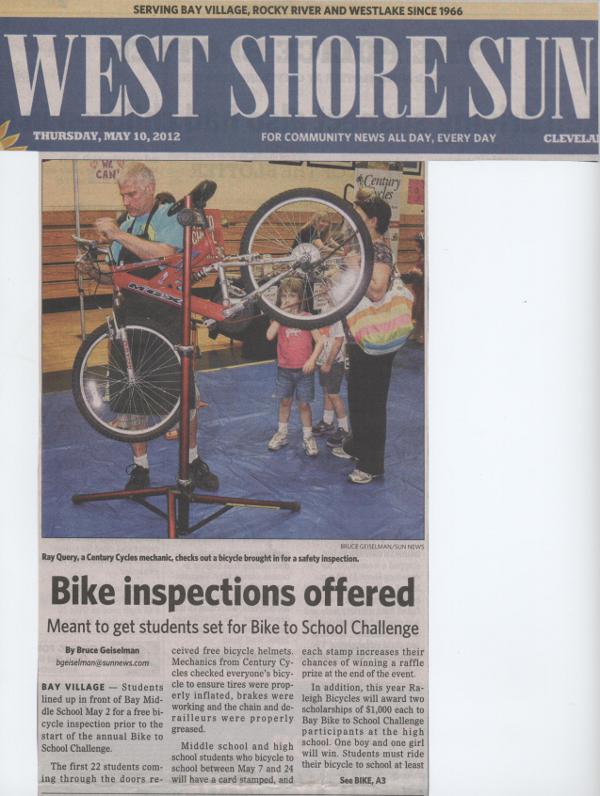 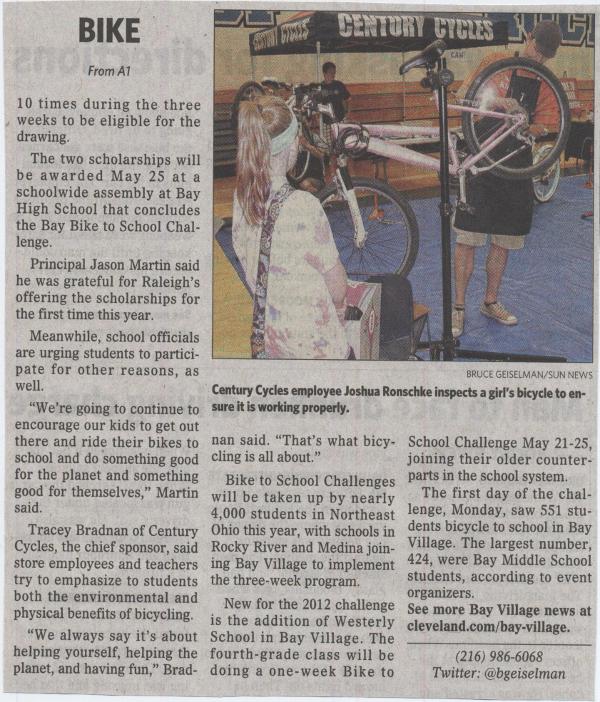 Meant to get students set for Bike to School Challenge

BAY VILLAGE -- Students lined up in front of Bay Middle School May 2 for a free bicycle inspection prior to the start of the annual Bike to School Challenge.

The first 22 students coming through the doors received free bicycle helmets. Mechanics from Century Cycles checked everyone's bicycle to ensure tires were properly inflated, brakes were working and the chain and derailleurs were properly greased.

Middle school and high school students who bicycle to school between May 7 and May 24 will have a card stamped, and each stamp increases their chances of winning a raffle prize at the end of the event.

In addition, this year Raleigh Bicycles will award two scholarships of $1,000 each to Bay Bike to School Challenge participants at the high school. One boy and one girl will win. Students must ride their bicycle to school at least 10 times during the three weeks to be eligible for the drawing.

The two scholarships will be awarded May 25 at a schoolwide assembly at Bay High School that concludes the Bay Bike to School Challenge.

Principal Jason Martin said he was grateful for Raleigh's offering the scholarships for the first time this year.

Meanwhile, school officials are urging students to participate for other reasons, as well.

Tracey Bradnan of Century Cycles, the chief sponsor, said store employees and teachers try to emphasize to students both the environmental and physical benefits of bicycling.

"We always say it's about helping yourself, helping the planet, and having fun," Bradnan said. "That's what bicycling is all about."

Bike to School Challenges will be taken up by nearly 4,000 students in Northeast Ohio this year, with schools in Rocky River and Medina joining Bay Village to implement the three-week program.

New for the 2012 challenge is the addition of Westerly School in Bay Village. The fourth-grade class will be doing a one-week Bike to School Challenge May 21-25, joining their older counterparts in the school system.

The first day of the challenge, Monday, saw 551 students bicycle to school in Bay Village. The largest number, 424, were Bay Middle School students, according to event organizers.