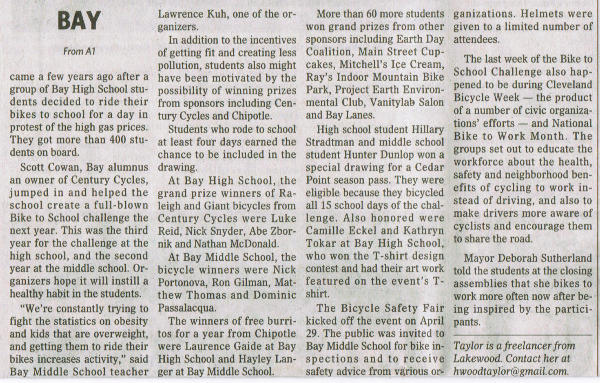 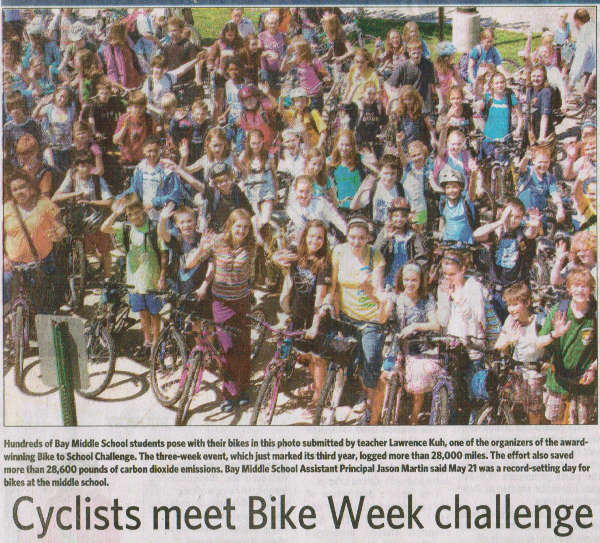 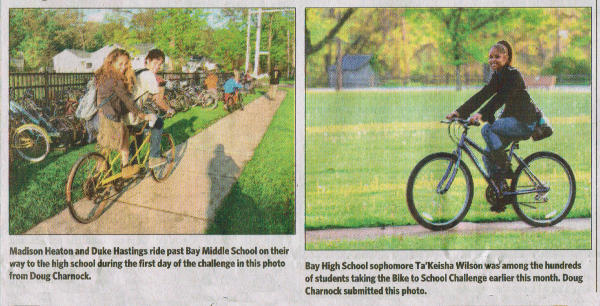 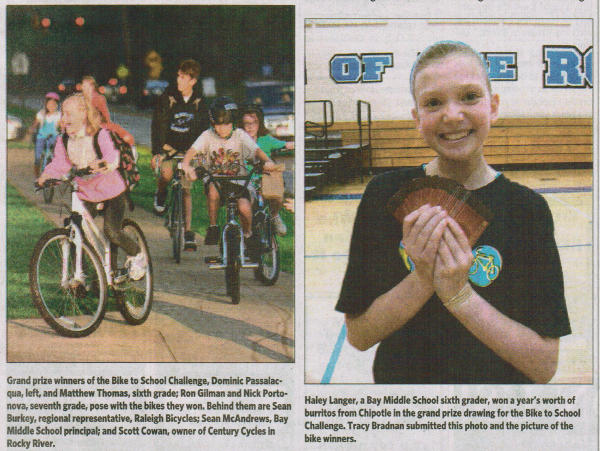 Soggy, chilly weather was no match for the will of 1,242 middle- and high-school students and staff members in Bay Village.

Members of the community took to their bicycles for the three-week Bike to School Challenge, which just concluded its third year. More than 28,000 total miles were logged this year.

The effort also saved more than 28,600 pounds worth of carbon dioxide emissinos by biking instead of driving to school during the challenge.

The students learned that statistic on May 21 during closing assemblies at each school. The total savings in emissions over the entire stretch of the program reaches more than 82,000 pounds.

Also on May 21, administrators gave the students one last push, which they called 1,000 Bike in Bay, encouraging as many riders as possible to bike to school that day.

The goal was nearly reached, as 930 bicycles hit the streets that day -- 285 at Bay High School, 514 at Bay Middle School, 125 at Westerly and a handful at Normandy, the school board office and Glenview.

"This was definitely the most bicycles we've ever had at Bay schools in one day," said Bay High School Assistant Principal Jason Martin, one of the event's organizers.

The idea for the Bike to School Challenge came a few years ago after a group of Bay High School students decided to ride their bikes to school for a day in protest of the high gas prices. They got more than 400 students on board.

Scott Cowan, Bay alumnus and owner of Century Cycles, jumped in and helped the school create a full-blown Bike to School challenge the next year. This was the third year for the challenge at the high school, and the second year at the middle school. Organizers hope it will install a healthy habit in the students.

"We're constantly trying to fight the statistics on obesity and kids that are overweight, and getting them to ride their bikes increases activity," said Bay Middle School teacher Lawrence Kuh, one of the organizers.

In addition to the incentives of getting fit and creating less pollution, students also might have been motivated by the possibility of winning prizes from sponsors including Century Cycles and Chipotle.

Students who rode to school at least four days earned the chance to be included in the drawing.

The winners of free burritos for a year from Chipotle were Laurence Gaide at Bay High School and Hayley Langer at Bay Middle School.

High school student Hillary Stradtman and middle school student Hunter Dunlop won a special drawing for a Cedar Point season pass. They were eligible because they bicycled all 15 school days of the challenge. Also honored were Camille Eckel and Kathryn Tokar at Bay High School, who won the T-shirt design contest and had their art work featured on the event's T-shirt.

The Bicycle Safety Fair kicked off the event on April 29. The public was invited to Bay Middle School for bike inspections and to receive safety advice from various organizations. Helmets were given to a limited number of attendees.

The last week of the Bike to School Challenge also happened to be during Cleveland Bicycle Week -- the product of a number of civic organizations' efforts -- and National Bike to Work Month. The groups set out to educate the workforce about the health, safety and neighborhood benefits of cycling to work instead of driving, and also to make drivers more aware of cyclists and encourage them to share the road.

Mayor Deborah Sutherland told the students at the closing assemblies that she bikes to work more often now after being inspired by the participants.

Taylor is a freelancer from Lakewood. Contact her at hwoodtaylor@gmail.com.