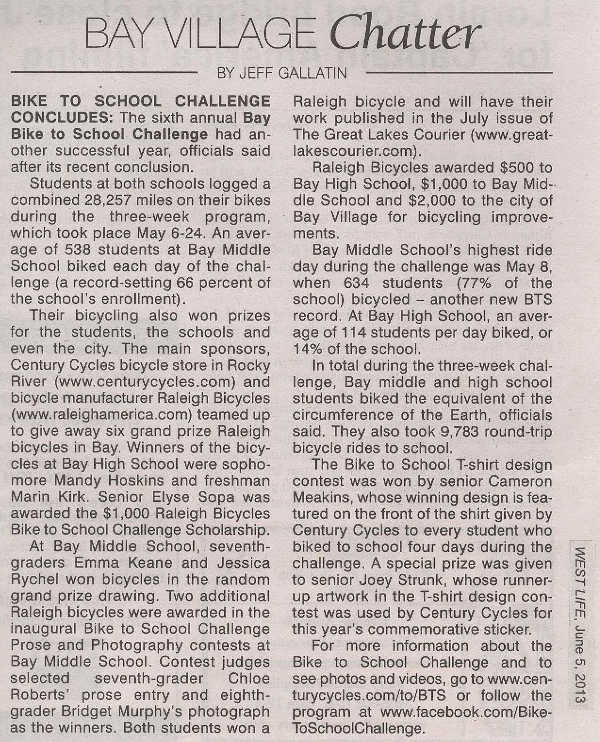 This year's Bike to School campaign was such a success, even Mayor Pam Bobst rode her bike to Rocky River Middle School for the concluding festivities on May 23.

"Every time I ride by the full bike racks at Rocky River Middle School, I get excited about how your bicycling is inspiring the community. We applaud and admire your efforts. You have been an inspiration to the entire community," Bobst told the full-school assembly.

In its third year at the middle school, the Bike to School Challenge set new records, according to sponsor Century Cycles. Between May 6 and 23, an average of 326 students biked each day, for a total of 14,618 miles - the equivalent of traveling halfway around the world.

An average of 52 percent of students cycled each day, and a new high was set on May 9, when 377 rode in. The students also burned about 248,506 calories (1,775 cans of Coke), prevented an estimated 16,079 pounds of heat-trapping carbon dioxide from entering the atmosphere and saved their parents $2,568.

In recognition of these accomplishments, co-sponsor Raleigh Bicycles presented Bobst with a $1,000 check to be used in support of bicycling improvements in the city. The company also gave the middle school $500 in recognition of exceeding its cycling goals.

Students biking to school had the opportunity to enter several contests. Winners of the random drawing for a pair of Raleigh bikes were Alex Rowley (grade 7) and Maurice Christopher (grade 8).

Two more bikes were also given away as prizes for the inaugural Bike to School Challenge photography and prose contests. Sixth-graders Charlotte Weixel and Sydney Williams won the photography contest and the prose contest, respectively. In addition to the bikes, the students will have their work published in the Great Lakes Courier's July issue.

The Bike to School T-shirt design winner was eighth-grader Jilliam Kinsley, who was rewarded with a prize package. Her design was featured on the shirts given by Century Cycles to every student who biked to school for four days.