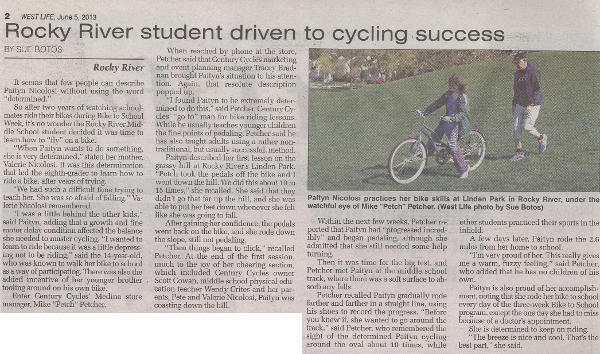 It seems that few people can describe Paityn Nicoloi without using the word "determined."

So after two years of watching schoolmates ride their bikes during Bike to School Week, it's no wonder the Rocky River Middle School student decided it was time to learn how to "fly" on a bike.

"When Paityn wants to do something, she is very determined," stated her mother, Valerie Nicolosi. It was this determiniation that led the eighth-grader to learn how to ride a bike, after years of trying.

"We had such a difficult time trying to teach her. She was so afraid of falling," Valerie Nicolosi remembered.

"I was a little behind the other kids," said Paityn, adding that a growth and fine motor delay condition affected the balance she needed to master cycling. "I wanted to learn to ride because it was a little depressing not to be riding," said the 14-year-old, who was known to walk her bike to school as a way of participating. There was also the added incentive of her younger brother tooling around on his own bike.

When reached by phone at the store, Petcher said that Century Cycles marketing and event planning manager Tracey Bradnan brought Paityn's situation to his attention. Again, that resolute description popped up."

I found Paityn to be extremely determined to do this," said Petcher, Century Cycles' "go to" man for bike riding lessons. While he usually teaches younger children the fine points of pedaling, Petcher said he has also taught adults usina a rather non-traditional, but usually successful, method.

Paityn described her first lesson on the grassy hill at Rocky River's Linden Park. "Petch took the pedals off the bike and I went down the hill. We did this about 10 to 15 times," she recalled. She said that they didn't go that far up the hill, and she was able to put her feet down whenever she felt like she was going to fall.

After gaining her confidence, the pedals went back on the bike, and she rode down the slope, still not pedaling.

"Then things began to click," recalled Petcher. At the end of the first session, much to the joy of her cheering section, which included Century Cycles owner Scott Cowan, middle school physical education teacher Wendy Crites and her parents, Pete and Valerie Nicolosi, Paityn was coasting down the hill.

Within the next few weeks, Petcher reported that Paityn had "progressed incredibly" and began pedaling, although she admitted that she still needed some help turning.

Then it was time for the big test, and Petcher met Paityn at the middle school track, where there was a soft surface to absorb any falls.

Petcher recalled Paityn gradually rode farther and farther in a straight line, using his shoes to record the progress. "Before you knew it, she wanted to go around the track," said Petcher, who remembered the sight of the determined Paityn cycling around the oval about 10 times, while other students practiced their sports in the infield.

A few days later, Paityn rode the 2.6 miles from her home to school.

"I'm very proud of her. This really gives me a warm, fuzzy feeling," said Petcher, who added that he has no children of his own.

Paityn is also proud of her accomplishment, nothing that she rode her bike to school every day of the three-week Bike to School program, except the one day she had to miss because of a doctor's appointment.

She is determined to keep on riding.

"The breeze is nice and cool. That's the best part," she said.