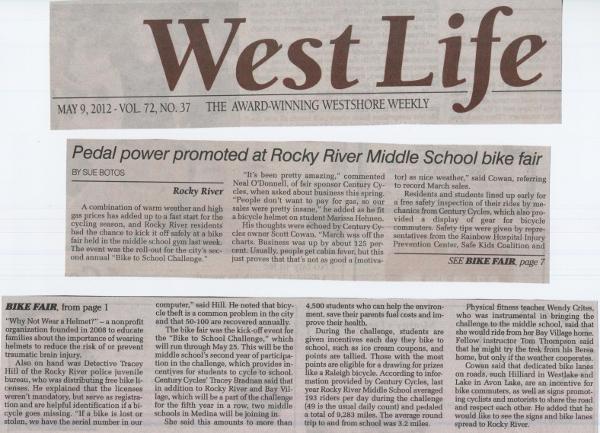 A combination of warm weather and high gas prices has added up to a fast start for the cycling season, and Rocky River residents had the chance to kick it off safely at a bike fair held in the middle school gym last week. The event was the roll out for the city's second annual "Bike to School Challenge."

"It's been pretty amazing," commented Neal O'Donnell, of fair sponsor Century Cycles, when asked about business this spring. "People dont' want to pay for gas, so our sales were pretty insane," he added as he fit a bicycle helmet on student Melissa Hebman.

His thoughts were echoed by Century Cycles owner Scott Cowan, "March was off the charts. Business was up about 125 percent. Usually, people get cabin fever, but this just proves that that's not as good (a motivator) as nice weather," said Cowan, referring to record March sales.

Residents and students lined up early for a free safety inspection of their rides by mechanics from Century Cycles, which also provided a display of gear for bicycle commuters. Safety tips were given by representatives Rainbow Hospital Injury Prevention Center, Safe Kids Coalition and "Why Not Wear a Helmet?" -- a nonprofit organization founded in 2008 to educate families about the importance of wearing helmets to reduce the risk of or prevent traumatic brain injury.

Also on hand was detective Tracey Hill of the Rocky River police juvenile bureau, who was distributing free bike licenses. He explained that the licenses weren't mandatory, but serve as registration and are helpful identification if a bicycle goes missing. "If a bike is lost or stolen, we have the serial number in our computer," said Hill. He noted that bicycle theft is a common problem in the city and that 50-100 are recovered annually.

The bike fair was the kick-off event for the "Bike to School Challenge," which will run through May 25. This will be the middle school's second year of participation in the challenge, which provides incentives for students to cycle to school. Century Cycles' Tracey Bradnan said that in addition to Rocky River and Bay Village, which will be a part of the challenge for the fifth year in a row, two middle schools in Medina will be joining in.

She said this amounts to more than 4,500 students who can help the environment, save their parents fuel costs and iimprove their health.

During the challenge, students are given incentives each day they bike to school, such as ice cream coupons, and points are tallied. Those with the most points are eligible for a drawing for prizes like a Raleigh bicycle. According to information provided by Century Cycles, last year Rocky River Middle School averaged 193 riders per day during the challenge (49 is the usual daily count) and pedaled a total of 9,283 miles. The average round trip to and from school was 3.2 miles.

Physical fitness teacher Wendy Crites, who was instrumental in bringing the challenge to the middle school, said that she would ride from her Bay Village home. Fellow instructor Tom Thompson said that he might try the trek from his Berea home, but only if the weather cooperates.

Cowan said that dedicated bike lanes on roads, such as Hilliard in Westlake and Lake in Avon Lake, are an incentive for bike commuters, as well as signs promoting cyclists to share the road and respect each other. He added that he would like to see the signs and bike lanes spread to Rocky River.