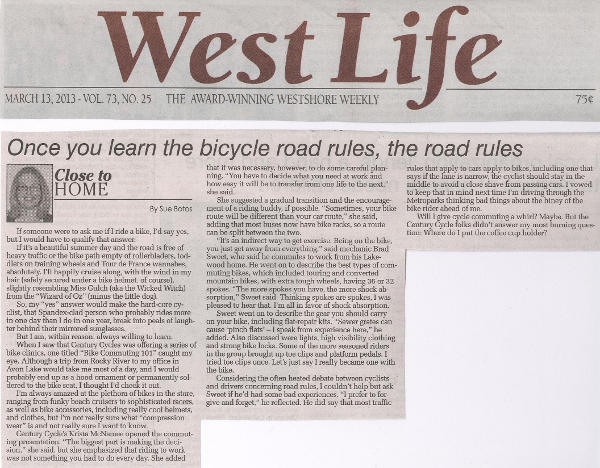 If someone were to ask me if I ride a bike, I'd say yes, but I would have to qualify that answer.

If it's a beautiful summer day and the road is free of heavy traffic or the bike path empty of rollerbladers, toddler on training wheels and Tour de France wannabes, absolutley. I'll happily cruise along, with the wind in my hair (safely secured under a bike helmet, of course), slightly resembling Miss Gulch (aka the Wicked Witch) from the "Wizard of Oz" (minus the little dog).

So, my "yes" answer would make the hard-core cyclist, that spandex-clad person who probably rides more in one day than I do in one year, break into peals of laughter behind their mirrored sunglasses.

But I am, within reason, always willing to learn.

When I saw that Century Cycles was offering a series of bike clinics, one titled "Bike Commuting 101" caught my eye. Although a trip from Rocky River to my office in Avon Lake would take me most of a day, and I would probably end up as a hood ornament or permanently soldered to the bike seat, I thought I'd check it out.

I'm always amazed at the plethora of bikes in the store, ranging from funky beach cruisers to sophisticated racers, as well as bike accessories, including really cool helmets, and clothes, but I'm not really sure what "compression wear" is and not really sure I want to know.

Century Cycle's Krista McNamee opened the commuting presentation. "The biggest part is making the decision," she said, but she empasized that riding to work was not something you had to do every day. She added that it was necessary, however, to do some careful planning, "You have to decide what you need at work how easy it will be to transfer from one life to the next," she said.

She suggested a gradual transition and the encouragement of a riding buddy, if possible. "Sometimes, your bike route will be different than your car route," she said, adding that most buses now have bike racks, so a route can be split between the two.

"It's an indirect way to get exercise. Being on the bike, you just get away from everything," said mechanic Brad Sweet, who said he commutes to work from his Lakewood home. He went on to describe the best type of commuting bikes, which included touring and coverted mountain bikes, with extra tough wheels, having 36 or 32 spokes. "The more spokes you have, the more shock absorption," Sweet said. Thinking spokes are spokes, I was pleased to hear that. I'm all in favor of shock absorption.

Sweet went on to describe the gear you should carry on your bike, including flat-repair kits. "Sewer grates can cause 'pinch flats' -- I speak from experience here," he added. Also discussed were lights, high-visibility clothing and strong bike locks. Some of the more seasoned riders in the group brought up toe clips and platform pedals. I tried toe clips once. Let's just say I really became one with the bike.

Considering the often heated debate between cyclists and drivers concerning road rules, I couldn't help but ask Sweet if he'd had some bad experiences. "I prefer to forgive and forget," he reflected. He did say that most traffic that apply to cars apply to bikes, including one that says if the lane is narrow, the cyclist should stay in the middle to avoid a close shave from passing cars. I vowed to keep that in mind next time I'm driving through the Metroparks thinking bad things about the hiney of the bike rider ahead of me.

Will I give cycle commuting a whirl? Maybe. But the Century Cycles folks didn't answer my most burning question: Where do I put the coffee cup holder?