The Washington Post sent travel writer Melanie D.G. Kaplan to Ohio for a story about biking and other activities in the Cuyahoga Valley, and she wrote quite extensively about the Cuyahoga Valley Scenic Railroad's Bike Aboard service, as well as our Night Rides on the Towpath Trail. Thank you! You can read the full article online at: http://wapo.st/1wSz1t5 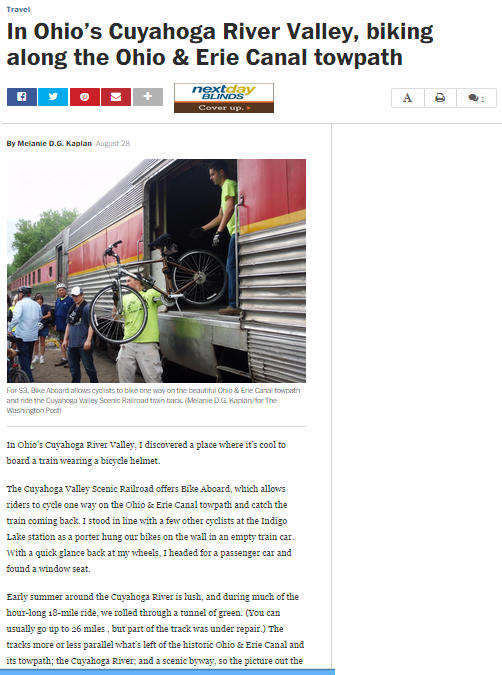 That night, I parked my car in Peninsula and biked a short distance to Century Cycles, which has been organizing night rides on the towpath for 20 years. I’d heard that sometimes up to 200 people participate, and one night ride every season is always a pajama party. Though this wasn’t the weekend to bust out my superhero PJs, I had still planned my trip around the ride. I imagined twinkling bikes zipping along the crushed limestone path in a magical dark forest, with frogs ribbiting and bats flying in the background.

I joined other cyclists waiting around the bike shop, and a few minutes after 8 p.m., a man with a bullhorn gave very informal instructions about the ride — which direction we were headed, where we should turn around, how to pass (politely, with warning) and that lights were mandatory.

But lights were unnecessary. I’d failed to remember that this was one of the longest days of the year, and 15 miles later, it was barely dusk; our night ride was foiled by the summer solstice. For a few miles, I rode beside a man who said that the fall rides were spectacular – pitch-black except for the bike light in front of you. I pedaled ahead, envious of his experience.

But by the time we returned to the bike shop, the twinkling I’d imagined earlier had come true: The sun had finally set, and I saw a woman wearing a bike jersey covered with stars and moons. She’d wrapped teeny blue Christmas lights around her bicycle, powered by a small battery pack, and at last, in the sort-of-darkness, they glowed. Yet try as I might, I still couldn’t hear any frogs.