From the Rockport Observer: 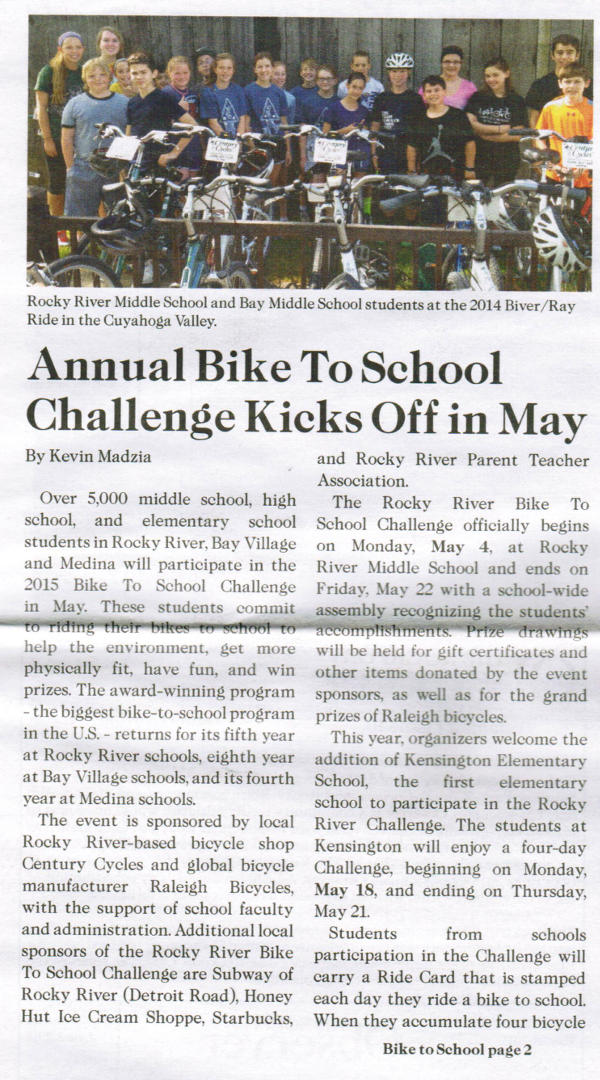 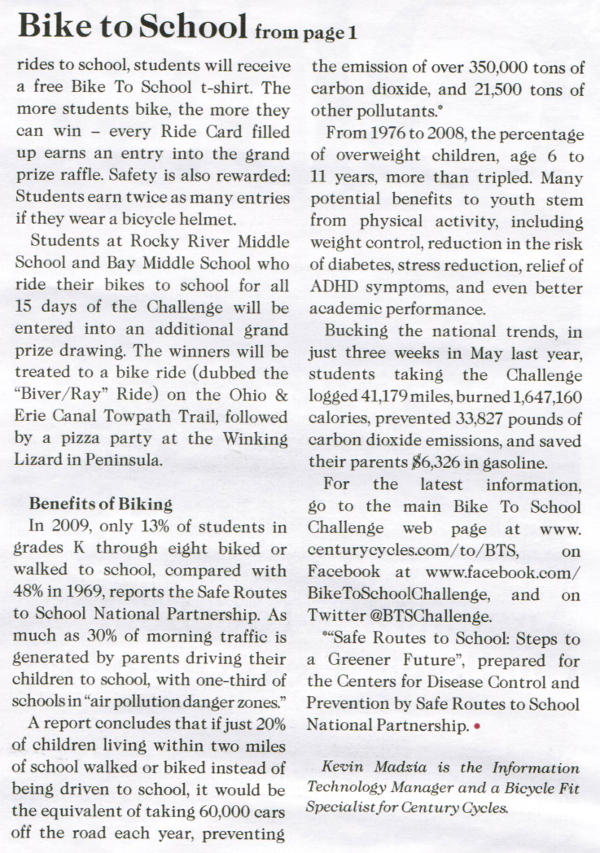 Over 5,000 middle school, high school, and elementary school students in Rocky River, Bay Village and Medina will participate in the 2015 Bike To School Challenge in May. These students commit to riding their bikes to school to help the environment, get more physically fit, have fun, and win prizes. The award-winning program - the biggest bike-to-school program in the U.S. - returns for its fifth year at Rocky River schools, eighth year at Bay Village schools, and its fourth year at Medina schools.

The Rocky River Bike To School Challenge officially begins on Monday, May 4, at Rocky River Middle School and ends on Friday, May 22 with a school-wide assembly recognizing the students' accomplishments. Prize drawings will be held for gift certificates and other items donated by the event sponsors, as well as for the grand prizes of Raleigh bicycles.

This year, organizers welcome the addition of Kensington Elementary School, the first elementary school to participate in the Rocky River Challenge. The students at Kensington will enjoy a four-day Challenge, beginning on Monday, May 18, and ending on Thursday, May 21.

Students from schools participation in the Challenge will carry a Ride Card that is stamped each day they ride a bike to school. When they accumulate four bicycle rides to school, students will receive a free Bike To School t-shirt. The more students bike, the more they can win – every Ride Card filled up earns an entry into the grand prize raffle. Safety is also rewarded: Students earn twice as many entries if they wear a bicycle helmet.

Students at Rocky River Middle School and Bay Middle School who ride their bikes to school for all 15 days of the Challenge will be entered into an additional grand prize drawing. The winners will be treated to a bike ride (dubbed the "Biver/Ray" Ride) on the Ohio & Erie Canal Towpath Trail, followed by a pizza party at the Winking Lizard in Peninsula.

In 2009, only 13% of students in grades K through eight biked or walked to school, compared with 48% in 1969, reports the Safe Routes to School National Partnership. As much as 30% of morning traffic is generated by parents driving their children to school, with one-third of schools in "air pollution danger zones."

A report concludes that if just 20% of children living within two miles of school walked or biked instead of being driven to school, it would be the equivalent of taking 60,000 cars off the road each year, preventing the emission of over 350,000 tons of carbon dioxide, and 21,500 tons of other pollutants.*

From 1976 to 2008, the percentage of overweight children, age 6 to 11 years, more than tripled. Many potential benefits to youth stem from physical activity, including weight control, reduction in the risk of diabetes, stress reduction, relief of ADHD symptoms, and even better academic performance.

For the latest information, go to the main Bike To School Challenge web page at www.centurycycles.com/to/BTS, on Facebook at www.facebook.com/BikeToSchoolChallenge, and on Twitter @BTSChallenge.