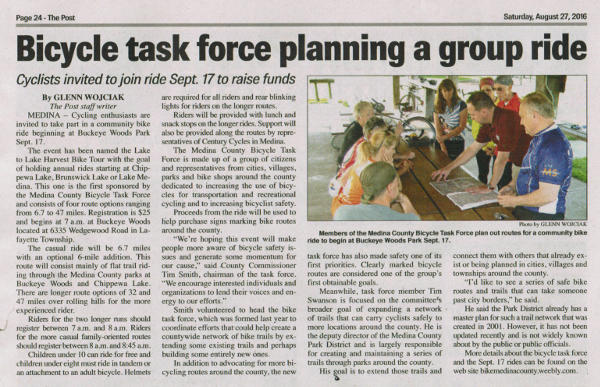 The event has been named the Lake to Lake Harvest Bike Tour with the goal of holding annual rides starting at Chippewa Lake, Brunswick Lake or Lake Medina. This one is the first sponsored by the Medina County Bicycle Task Force and consists of four route options ranging from 6.7 to 47 miles. Registration is $25 and begins at 7 a.m. at Buckeye Woods located at 6335 Wedgewood Road in Lafayette Township.

The casual ride will be 6.7 miles with an optional 6-mile addition. This route will consist mainly of flat trail riding through the Medina County parks at Buckeye Woods and Chippewa Lake. There are longer route options of 32 and 47 miles over rolling hills for the more experienced rider.

Children under 10 can ride for free and children under eight must ride in tandem or an attachment to an adult bicycle. Helmets are required for all riders and rear blinking lights for riders on the longer routes.

Riders will be provided with lunch and snack stops on the longer rides. Support will also be provided along the routes by representatives of Century Cycles in Medina.

The Medina County Bicycle Task Force is made up of a group of citizens and representatives from cities, villages, parks and bike shops around the county dedicated to increasing the use of bicycles for transportation and recreational cycling and to increasing bicyclist safety.

Proceeds from the ride will be used to help purchase signs marking bike routes around the county.

"We're hoping this event will make people more aware of bicycle safety issues and generate some momentum for our cause," said County Commissioner Tim Smith, chairman of the task force. "We encourage interested individuals and organizations to lend their voices and energy to our efforts."

Smith volunteered to head the bike task force, which was formed last year to coordinate efforts that could help create a countywide network of bike trails by extending some existing trails and perhaps building some entirely new ones.

In addition to advocating for more bicycling routes around the county, the new task force has also made safety one of its first priorities. Clearly marked bicycle routes are considered one of the group's first obtainable goals.

Meanwhile, task force member Tim Swanson is focused on the committee's broader goal of expanding a network of trails that can carry cyclists safely to more locations around the county. He is the deputy director of the Medina County Park District and is largely responsible for creating and maintaining a series of trails through parks around the county.

His goal is to extend those trails and connect them with others that already exist or being planned in cities, villages and townships around the county.

"I'd like to see a series of safe bike routes and trails that can take someone past city borders," he said.

He said the Park District already has a master plan for such a trail network that was created in 2001. However, it has not been updated recently and is not widely known about by the public or public officials.

More details about the bicycle task force and the Sept. 17 rides can be found on teh web site bikemedinacounty.weebly.com.