The Capital Times of Madison, Wisconsin mentioned the Century Cycles Bike To School Challenge in an online article. You can read the full article here.

For kids, biking to school isn’t just good exercise. Turns out it can also help them learn better and be more independent.

To that end, three communities in northeast Ohio are working hard to become the “bike to school” leaders in the U.S. What they’re finding might be instructive for Madison, which currently prohibits kids under age 10 from riding their bikes to school without their parents having a written letter on file.

(As I wrote earlier this week, it’s a policy Sonia Dubielzig, Safe Routes to School Coordinator for the Madison School District, would like to change.)

In Ohio, as reported by the Atlantic Cities, the Century Cycles bicycle store launched a three week, "Bike to School Challenge" six years ago. It was staged initially to protest high gas prices but has grown into a wildly popular annual event with more than 4,000 kids participating.

That challenge has led to more kids biking to school routinely, according to Sean McAndrews, principal of Bay Middle School in Bay Village, Ohio.

According to the article, “he estimates that during the challenge, as many as 75 percent of the 820 5th through 8th graders at the school arrive by bike…. But it doesn’t end there. McAndrews says that these days, as many as half of the school’s students ride to school on a more regular basis, some coming from two or three miles away.” 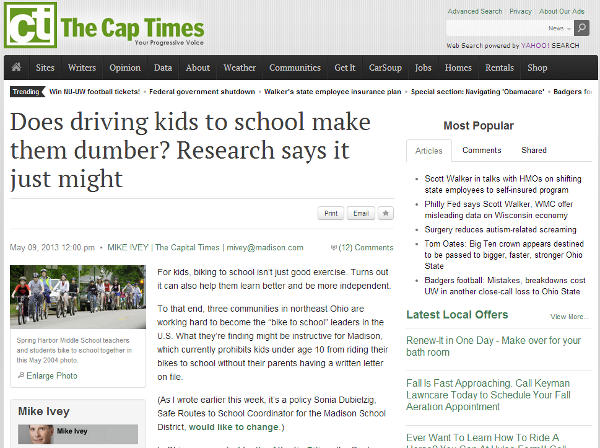