From the Rockport Observer of Rocky River and Fairview Park, Ohio: 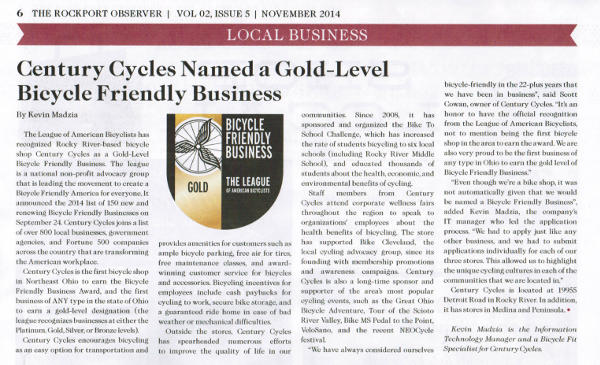 Century Cycles is the first bicycle shop in Northeast Ohio to earn the Bicycle Friendly Business Award, and the first business of ANY type in the state of Ohio to earn a gold-level designation (the league recognizes businesses at either the Platinum, Gold, Silver, or Bronze levels).

Century Cycles encourages bicycling as an easy option for transportation and provides amenities for customers such as ample bicycle parking, free air for tires, free maintenance classes, and award-winning customer service for bicycles and accessories. Bicycling incentives for employees include cash paybacks for cycling to work, secure bike storage, and a guaranteed ride home in case of bad weather or mechanical difficulties.

Outside the stores, Century Cycles has spearheaded numerous efforts to improve the quality of life in our communities. Since 2008, it has sponsored and organized the Bike To School Challenge, which has increased the rate of students bicycling to six local schools (including Rocky River Middle School), and educated thousands of students about the health, economic, and environmental benefits of cycling.

Staff members from Century Cycles attend corporate wellness fairs throughout the region to speak to organizations' employees about the health benefits of bicycling. The store has supported Bike Cleveland, the local cycling advocacy group, since its founding with membership promotions and awareness campaigns. Century Cycles is also a long-time sponsor and supporter of the area's most popular cycling events, such as the Great Ohio Bicycle Adventure, Tour of the Scioto River Valley, Bike MS Pedal to the Point, VeloSano, and the recent NEOCycle festival.

"We have always considered ourselves bicycle-friendly in the 22-plus years that we have been in business", said Scott Cowan, owner of Century Cycles. "It's an honor to have the official recognition from the League of American Bicyclists, not to mention being the first bicycle shop in the area to earn the award. We are also very proud to be the first business of any type in Ohio to earn the gold level of Bicycle Friendly Business."

"Even though we're a bike shop, it was not automatically given that we would be named a Bicycle Friendly Business", added Kevin Madzia, the company's IT manager who led the application process. "We had to apply just like any other business, and we had to submit applications individually for each of our three stores. This allowed us to highlight the unique cycling cultures in each of the communities that we are located in."

Century Cycles is located at 19955 Detroit Road in Rocky River. In addition, it has stores in Medina and Peninsula.