From the September 15, 2010 edition of The Plain Dealer; you can read the online version here: 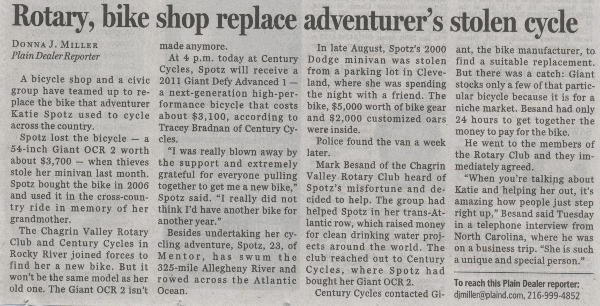 A bicycle shop and a civic group have teamed up to replace the bike that adventurer Katie Spotz used to cycle across the country.

Spotz lost the bicycle--a 54-inch Giant OCR 2 worth about $3700--when thieves stole her minivan last month. Spotz bought the bike in 2006 and used it in the cross-country ride in memory of her grandmother.

The Chagrin Valley Rotary Club and Century Cycles in Rocky River joined forces to find her a new bike. But it won't be the same model as her old one. The Giant OCR 2 isn't made anymore.

At 4 p.m. today at Century Cycles, Spotz will receive a 2011 Giant Defy Advanced 1--a next-generation high-performance bicycle that costs around $3,100, according to Tracey Bradnan of Century Cycles.

"I was really blown away by the support and and extremely grateful for everyone pulling together to get me a new bike," Spotz said. "I really did not think I'd have another bike for another year."

Besides undertaking her cycling adventure, Spotz, 23, of Mentor, has swum the entire 325-mile Allegheny River and rowed across the Atlantic Ocean.

In late August, Spotz's 2000 Dodge minivan was stolen from a parking lot in Cleveland, where she was spending the night with a friend. The bike, $5,000 worth of bike gear and $2,000 customized oars were inside.

Mark Besand of the Chagrin Valley Rotary Club heard of Spotz's misfortune and decided to help. The group had helped Spotz in her trans-Atlantic row, which raised money for clean drinking water projects around the world. The club reached out to Century Cycles, where Spotz had bought her Giant OCR 2.

Century Cycles contacted Giant, the bike manufacturer, to find a suitable replacement. But there was one catch: Giant stocks only a few of that particular bicycle because it is for a niche market. Besand had only 24 hours to get together the money to pay for the bike.

He went to the members of the Rotary Club and they immediately agreed.

"When you're talking about Katie and helping her out, it's amazing how people just step right up," Besard said Tuesday in a telephone interview from North Carolina, where he was on a business trip. "She is such a unique and special person."