Century Cycles Owner Scott Cowan was quoted in this article from the April 9, 2010 edition of the Plain Dealer, which reported on Cleveland being selected in Bicycling magazine as one of the Top 50 cycling cities in the United States: 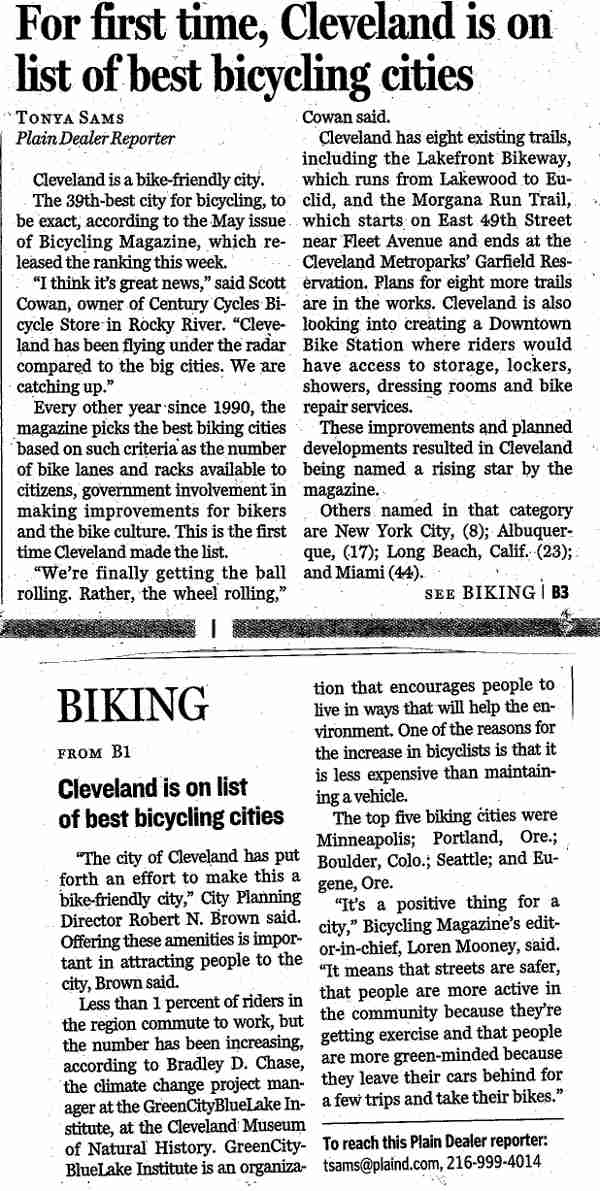 For first time, Cleveland is on list of best cycling cities

Cleveland is a bike-friendly city.

The 39th-best city for bicycling, to be exact, according to the May issue of Bicycling Magazine, whjich released the ranking this week.

"I think it's great news," said Scott Cowan, owner of Century Cycles Bicycle Store in Rocky River. "Cleveland has been flying under the radar compared to the big cities. We are catching up."

Every other year since 1990, the magazine picks the best biking cities based on such criteria as the number of bike lanes and rack available to citizens, government involvement in making improvements for bikers and the bike culture. This is the first time Cleveland made the list.

"We're finally getting the ball rolling. Rather, the wheel rolling," Cowan said.

Cleveland has eight existing trails, including the Lakefront Bikeway, which runs from Lakewood to Euclid, and the Morgana Run Trail, which starts on East 49th Street near Fleet Avenue and ends at the Cleveland Metroparks' Garfield Reservation. Plans for eight more trails are in the work. Cleveland is also looking into creating a Downtown Bike Station where riders would have access to storage, lockers, showers, dressing rooms and bike repair services.

These improvements and planned developments resulted in Cleveland being named a rising star by the magazine.

"The city of Cleveland has put forth an effort to make this a bike-friendly city," City Planning Director Robert N. Brown said. Offering these amenities is important in attracting people to the city, Brown said.

Less than 1 percent of riders in the region commute to work, but the number has been increasing, according to Bradley D. Chase, the climate change project manager at the Cleveland Museum of Natural History. GreenCityBlueLake Institute is an organization that encourages people to live in ways that will help the environment. One of the reasons for the increase n bicyclists is that it is less expensive than maintaining a vehicle.