"Fashion Flash" is the the Plain Dealer's "weekly gallery of Clevelanders with notable style." The May 11, 2011 edition featured an interview with Rachael Vivolo, future wife of Josh from the Century Cycles store in Rocky River. Scroll down below the images to read the full text of the article. 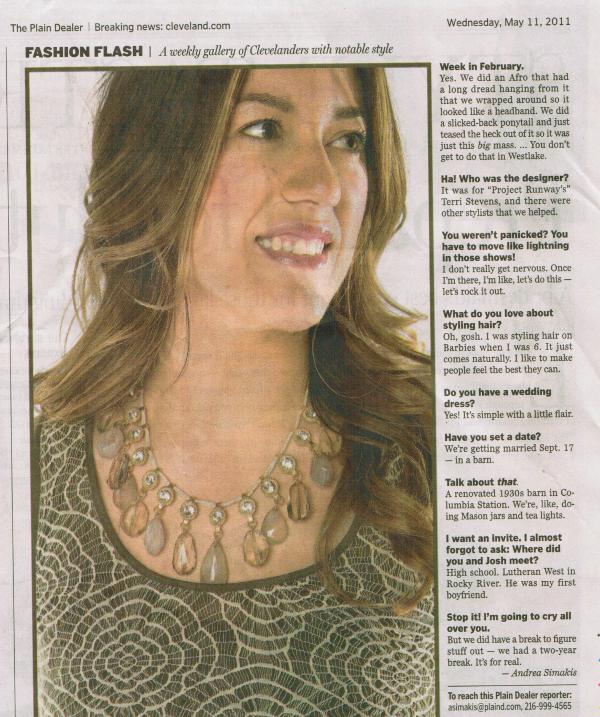 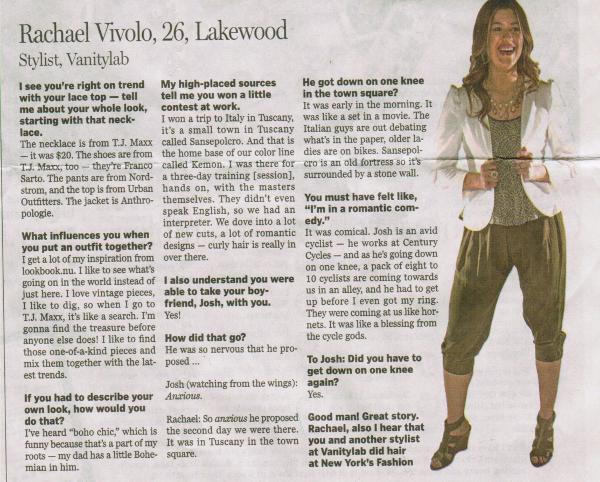 I see you're right on trend with your lace top -- tell me about your whole look, starting with that necklace.
The necklace is from T.J. Maxx -- it was $20. The shoes are from T.J. Maxx, too -- they're Franco Sarto. The pants from from Nordstrom, and the top is from Urban Outfitters. The jacket is Anthropologie.

What influences you when you put an outfit together?
I get a lot of inspiration from lookbook.nu. I like to see what's going on in the world instead of just here. I love vintage pieces, I like to dig, so when I go to T.J. Maxx, it's like a search. I'm gonna find the treasure before anyone else does! I like to find those one-of-a-kind pieces and mix them together with the latest trends.

If you had to describe your own look, how would you do that?
I've heard "boho chic," which is funny because that's a part of my roots -- my dad has a little Bohemian in him.

My high-placed sources tell me you won a little contest at work.
I won a trip to Italy in Tuscany, it's a small town in Tuscany called Sansepolcro. And that is the home base of our color line called Kemon. I was there for a three-day training [session], hands on, with the master themselves. They didn't even speak English, so we had an interpreter. We dove into a lot of new cuts, a lot of romantic designs -- curly hair is really in over there.

I also understand you were able to take your boyfriend, Josh, with you.
He was so nervous that he proposed...

Josh (wathcing from the wings):
Anxious.

Rachael: So anxious he proposed the second day we were there. It was in Tuscany in the town square.

He got down on one knee in the town square?
It was early in the morning. It was like a set in a movie. The Italian guys are out debating what's in the paper, older ladies are on bikes. Sansepolcro is an old fortress so it's surrounded by a stone wall.

You must have felt like, "I'm in a romantic comedy."
It was comical. Josh is an avid cyclist - he works at Century Cycles - and as he's going down on one knee, a pack of eight to 10 cyclists are comings towards us in an alley, and he had to get up before I even got my ring. They were coming at us like hornets. It was like a blessing from the cycle gods.

To Josh: Did you have to get down on one knee again?
Yes.

Good man! Great story. Rachael, also I hear that you and another stylist at Vanitylab did hair at New York's Fashion Week in February.
Yes, We did an Afro that had a long dread hanging from it that we wrapped around so it looked like a headband. We did a slicked-back ponytail and just teased the heck out of it so it was just this big mess...You don't get to do that in Westlake.

Ha! Who was the designer?
It was for "Project Runway's" Terri Stevens, and there were other stylists that we helped.

You weren't panicked? You have to move like lightning in those shows!
I don't really get nervous. Once I'm there, I'm like, let's do this -- let's rock it out.

What do you love about styling hair?
Oh, gosh. I was styling hair on Barbies when I was 6. It just comes naturally. I like to make people feel the best they can.

Do you have a wedding dress?
Yes! It's simple with a little flair.

Talk about that.
A renovated 1930s barn in Columbia Station. We're like, doing Mason jars and tea lights.

I want an invite. I almost forgot to ask: Where did you and Josh meet?
High School. Lutheran West in Rocky River. He was my first boyfriend.

Stop it! I'm going to cry all over you.
But we did have a break to figure stuff out -- we had a two-year break. It's for real.