From the Cleveland Plain Dealer: 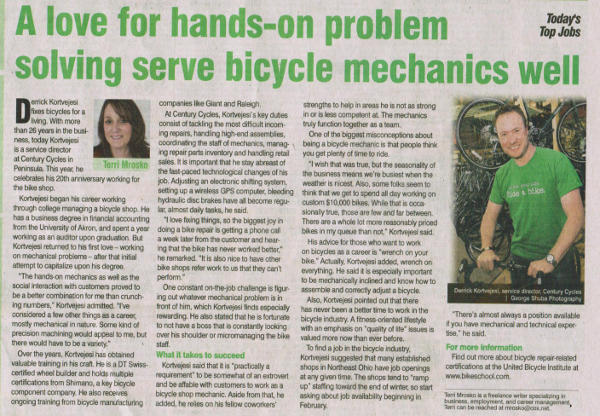 Derrick Kortvejesi fixes bicycles for a living. With more than 26 years in the business, today Kortvejesi is a service director at Century Cycles in Peninsula. This year, he celebrates his 20th anniversary working for the bike shop.

Kortvejesi began his career working through college managing a bicycle shop. He has a business degree in financial accounting from the University of Akron, and spent a year working as an auditor upon graduation. But Kortvejesi returned to his first love--working on mechanical problems--after that initial attempt to capitalize on his degree.

"The hands-on mechanics as well as the social interaction with customers proved to be a better combination for me than crunching numbers," Kortvejesi admitted. "I've considered a few other things as a career, mostly mechanical in nature. Some kind of precision machining would appeal to me, but there would have to be a variety."

Over the years, Kortvejesi has obtained valuable training in his craft. He is a DT Swiss-certified wheel builder and holds multiple certifications from Shimano, a key bicycle component company. He also receives ongoing training from bicycle manufacturing companies like Giant and Raleigh.

At Century Cycles, Kortvejesi's key duties consist of trackling the most difficult imcoming repairs, handling high-tech assemblies, coordinating the staff of mechanics, managing repair parts inventory and handling retail sales. It is important that he stay abreast of the fast-paced technological changes of his job. Adjusting an electronic shifting system, setting up a wireless GPS computer, bleeding hydraulic disc brakes have all become regular, almost daily tasks, he said.

"I love fixing things, so the biggest joy in doing a bike repair is getting a phone call a week later from the customer and hearing that the bike has never worked better," he remarked. "It is also nice to have other bike shops refer work to us that they can't perform."

One constant on-the-job challenge is figuring out whatever mechanicl problem is in front of him, which Kortvejesi finds especially rewarding. He also stated that he is fortunate to not have a boss that is constantly looking over his shoulder or micromanaging the bike staff.

What it takes to succeed

Kortvejesi said that is is "practically a requirement" to be somewhat of an extrovert and be affable with customers to work as a bicycle shop mechanic. Aside from that, he added, he relies on his fellow coworkers' strengths to help in areas he is not as strong in or is less competent at. The mechanics truly function together as a team.

One of the biggest misconceptions about being a bicycle mechanic is that people think you get plenty of time to ride.

"I wish that was true, but the seasonality of the business means we're busiest when the weather is nicest. Also, some folks seem to think that we get to spend all day working on customer $10,000 bikes. While that is occasionally true, those are few and far between. There are a whole lot more reasonably priced bikes in my queue than not," Kortvejesi said.

His advice for those who want to work on bicycles as a career is "wrench on your bike." Actually, Kortvejesi added, wrench on everything. He said it is especially important to be mechanically inclined and know how to assemble and correctly adjust a bicycle.

Also, Kortvejesi pointed out that there has never been a better time to work in the bicycle industry. A fitness-oriented lifestyle with an emphasis on "quality of life" issues is valued more now than ever before.

To find a job in the bicycle industry, Kortvejesi suggested that many established shops in Northeast Ohio have job openings at any given time. The shops tend to "ramp up" staffing toward the end of winter, so start asking about job availability beginning in February.

"There's almost always a position available if you have mechanical and technical expertise," he said.

Find out more about bicycle repair-related certifications at the United Bicycle Institute at www.bikeschool.com.

Terri Mrosko is a freelance writer specializing in business, employment, and career management. Terri can be reached at mrosko@cox.net.