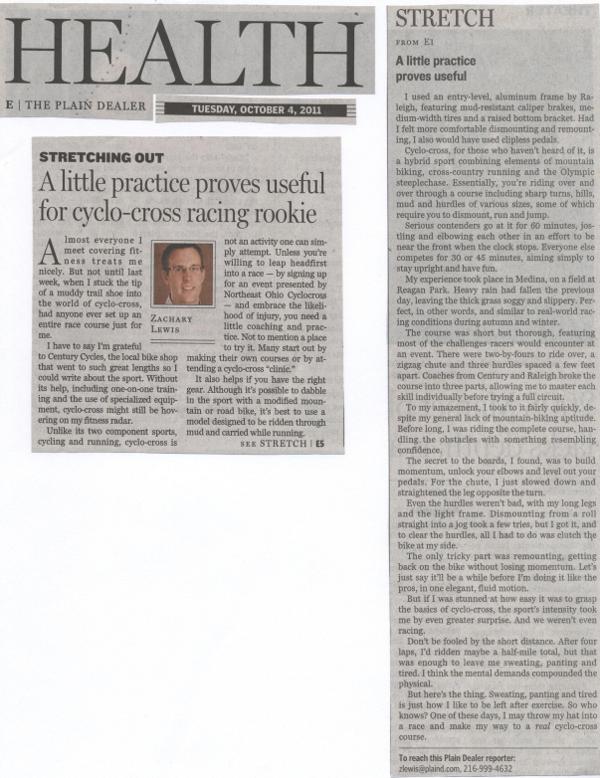 Almost everyone I meet covering fitness treats me nicely. But not until last week, when I stuck the tip of a muddy trail shoe into the world of cyclo-cross, had anyone ever set up an entire race course just for me.

I have to say I'm grateful to Century Cycles, the local bike shop that went to such great lengths so I could write about the sport. Without its help, including one-on-one training and the use of specialized equipment, cyclo-cross might still be hovering on my fitness radar.

Unlike its two component sports, cycling and running, cyclo-cross is not an activity one can simply attempt. Unless you're willing to leap headfirst into a race - by signing up for an event presented by Northeast Ohio Cyclocross - and embrace the likelihood of injury, you need a little coaching and practice. Not to mention a place to try it. Many start out by making their own courses or by attending a cyclo-cross "clinic."

It also helps if you have the right gear. Although it's possible to dabble in the sport with a modified mountain or road bike, it's best to use a model designed to be ridden through mud and carried while running.

I used an entry-level, aluminum frame by Raleigh, featuring mud-resistant caliper brakes, medium-width tires and a raised bottom bracket. Had I felt more comfortable dismounting and remounting, I also would have used clipless pedals.

Cyclo-cross, for those who haven't heard of it, is a hybrid sport combining elements of mountain biking, cross-country running and the Olympic steeplechase. Essentially, you're riding over and over through a course including sharp turns, hills, mud and hurdles of various sizes, some of which require you to dismount, run and jump.

Serious contenders go at it for 60 minutes, jostling and elbowing each other in an effort to be near the front when the clock stops. Everyone else competes for 30 or 45 minutes, aiming simply to stay upright and have fun.

My experience took place in Medina, on a field at Reagan Park. Heavy rain had fallen the previous day, leaving the thick grass soggy and slippery. Perfect, in other words, and similar to real-world racing conditions during autumn and winter.

The course was short but thorough, featuring most of the challenges racers would encounter at an event. There were two-by-fours to ride over, a zigzag chute and three hurdles spaced a few feet apart. Coaches from Century and Raleigh broke the course into three parts, allowing allowing me to master each skill indiviually before trying a full circuit.

To my amazement, I took to it fairly quickly, despite my general lack of mountain-biking apititude. Before long, I was riding the complete course, handling the obstacles with something resembling confidence.

The secret to the boards, I found, was to build momentum, unlock your elbows and level out your pedals. For the chute, I just slowed down and straightened the leg opposite the turn.

Even the hurdles weren't bad, with my long legs and the light frame. Dismounting from a roll straight into a jog took a few tries, but I got it, and to clear the hurdles, all I had to do was clutch the bike at my side.

The only tricky part was remounting, getting back on the bike without losing momentum. Let's just say it'll be while before I'm doing it like the pros, in one elegant, fluid motion.

But if I was stunned at how easy it was to grasp the basics of cyclo-cross, the sport's intensity took my by even greater surprise. And we weren't even racing.

Don't be fooled by the short distance. After four laps, I'd ridden maybe a half-mile total, but that was enough to leave me sweating, panting and tired. I think the mental demands compounded the physical.

But here's the thing. Sweating, panting and tired is just how I like to be after exercise. So who knows? One of these days, I may throw my hat into a race and make my way to a real cyclo-cross course.