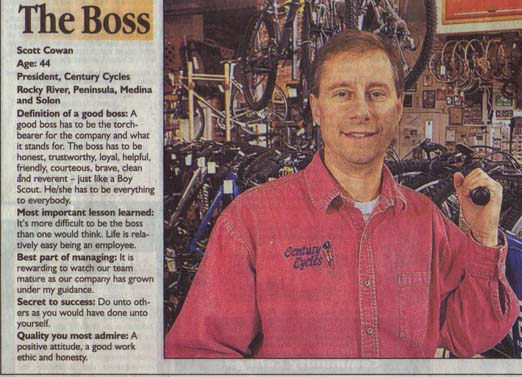 Definition of a good boss: A good boss has to be the torch-bearer for the company and what it stands for. The boss has to be honest, trustworthy, loyal, helpful, friendly, courteous, brave, clean and reverent -- just like a Boy Scout. He/she has to be everything to everybody.

Most important lesson learned: It's more difficult to be the boss than one would think. Life is relatively easy being an employee.

Best part of managing: It is rewarding to watch our team mature as our company has grown under my guidance.

Secret to success: Do unto others as you would have done unto yourself.

Quality you most admire: A positive attitude, a good work ethic and honesty. 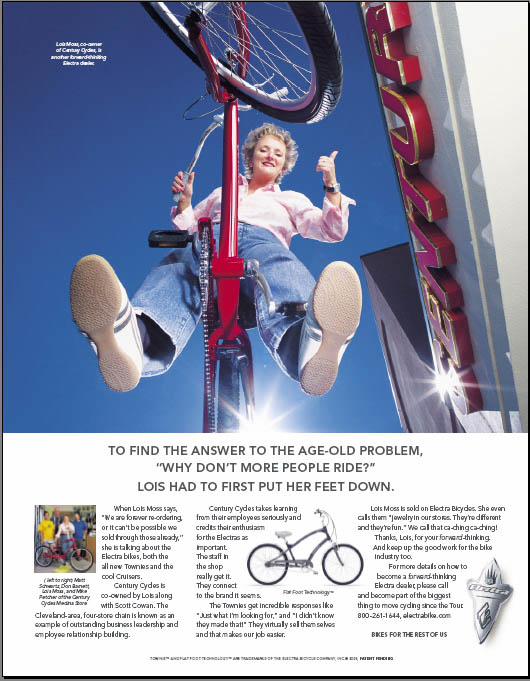 TO FIND THE ANSWER TO THE AGE-OLD PROBLEM,
"WHY DON'T MORE PEOPLE RIDE?"
LOIS HAD TO FIRST PUT HER FEET DOWN.

When Lois Mass says, "We are forever re-ordering, or it can't be possible we sold through those already," she is talking about the Electra bikes, both the all new Townies and the cool cruisers.

Century Cycles is co-owned by Lois along with Scott Cowan. The Cleveland-area, four-store chain is known as an example of outstanding business leadership and employee relationship building.

Century Cycles takes learning from their employees seriously and credits their enthusiasm for the Electra as important. The staff in the shop really get it. They connect to the brand it seems.

The Townies get incredible responses like "Just what I'm looking for," and "I didn't know they made that!" They virtually sell themselves and that makes our job easier.

Lois Moss is sold on Electra Bicycles. She even calls them "jewelry in our stores. They're different and they're fun." We call that ca-ching ca-ching!

Thanks, Lois, for your forward-thinking. And keep up the good work for the bike industry too.

For more details on how to become a forward-thinking Electra dealer, please call and become part of the biggest thing to move cycling since the Tour. 800-261-1644, electrabike.com

BIKES FOR THE REST OF US 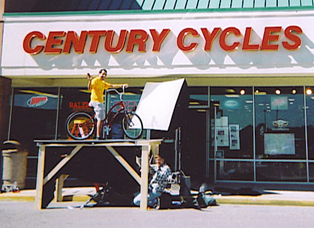 This picture shows how the photo for the advertisement was set up. To shoot Lois from below, a wooden platform with a glass surface was built in front of the Medina store. Matt acted as a stand-in for Lois while the photographer made all of the necessary adjustments to the platform, lighting, and photo equipment.

Century Cycles is proud to be featured in the Nov. 24-30 issue of the Free Times, as a part of their Gift Guide for the 2004 holiday season. Our section of the article is reproduced below. The Free Times of Cleveland is no longer published.

A bike for the dedicated follower of fashion
By Michael Gill 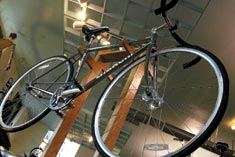 SCOTT COWAN can express the rising hipness of the fixie in sales figures. He says Century Cycles didn't sell a single fixed-gear track bicycle for its first seven years in business. Then, five years ago somebody bought one. In the last year they've sold 20.

That's a tiny number, even if it represents just one of the region's bicycle retailers. But it's not so tiny if you consider that these bikes weren't conceived for use on the road, but on banked tracks. And the nearest velodrome is north of Detroit.

It's a fashion thing, says Aaron Maughan, who works at Century Cycles' Rocky River store. The messengers ride them. The hipsters want them.

But it's more than that. He says people who look to bicycles for simplicity find the ultimate expression of that idea in the fixie. “They come looking for a fashion accessory, a bike everyone will think is cool, but they fall in love with them until they don't even care if it's cool.”

Here's why: The fixie is clean: no cables or clips to clutter up the frame, no shifting mechanism, no brake levers, indeed, no brakes. The name refers to the single-speed rear hub, with the gear locked in place so that if the wheel is turning, so are the chain and pedals.

Let's just say that gives you a more thorough understanding of your momentum: The bike communicates through your legs exactly how much force is necessary to stop it. Turns out that's quite a bit.

If you decide to mount one of these naked hard bodies, beware that if the wheels are turning, your legs are, too. You can't stop your inside pedal high to lean through a turn. You can't stop your feet at three and six o'clock to hop a curb. It's not quite like you have to learn to ride a bicycle all over again. But there's a little of that.

Jim Sheehan, who runs the Ohio City Bike Co-op (1823 Columbus Rd., 216.830.2667), says many of the people who get memberships there use the tools and loaned expertise to build fixed-gear bikes out of recycled parts. He says some of them build bikes that have the fixie look but are actually single-speed freewheelers. Thankfully, builders of the single-speed freewheeler do typically add a front brake.

If you've got someone on your list who might be susceptible to the fixie's charms, there's good news: fewer parts cost fewer dollars. We found an Italian job at Century Cycles — a 2004 version of the classic machine from richly pedigreed Bianchi — for just $499. So if your special someone would fit on a 49-centimeter frame, you ought to march right down there and snatch up this last of the 2004 models.

The bike we saw compromised slightly on snob appeal but not much on performance. It comes with steel bars, which you can pull hard with confidence in a sprint. Its Reynolds 520 tubes make for nice chrome-moly ride, not quite as light as the company's 531 tubes. The tires are clinchers instead of sew-ups, which makes it much easier to fix a flat. Components from Wilderness Trail Bikes and Bianchi itself cut the cost quite a bit, but you won't notice any difference in the way they work.

Any shortcomings on this machine are aesthetic and in the eye of the beholder. If you're unquenchably hot for the classics, you might notice that the TIG welded frame doesn't need lugs, and therefore doesn't have their linear grace. The all-over chrome is almost as cool as Bianchi's legendary green. But let's get real: if a TIG welded chrome Bianchi sounds like a compromise to you, then you truly are a snob.

Cleveland Magazine: Escape...In Your Own Backyard!

I discovered my favorite route after we first opened Century Cycles in Peninsula. The total route is 12 miles. Take the Towpath Trail south from Peninsula. At four miles, you'll come to a boardwalk built over a beaver marsh. Just after the Towpath crosses Riverview Road, exit the path. Cross the railroad track and follow Ira Road. It becomes Oak Hill Road near Hale Farm and Village. At the bottom of the hill, you will ride through the Everett Road Covered Bridge. Turn right out of the bridge parking lot onto Everett Road Road and you'll come to Riverview Road. Head north on the Towpath Trail, which can be accessed between the restored buildings in this area, and you'll quickly find yourself back in Peninsula.