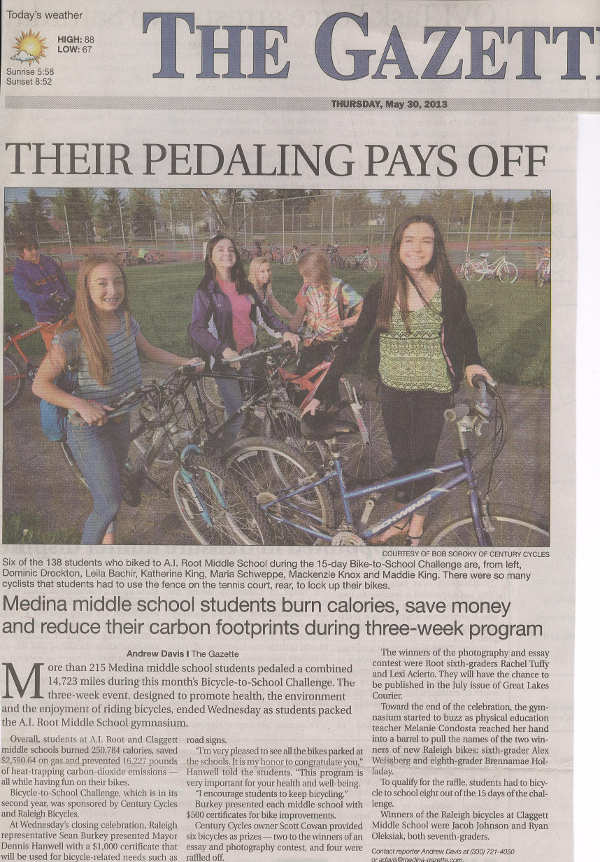 Overall, students at A.I. Root and Clagget middle schoole burned 250,784 calories, saved $2,490.64 on gas and prevented 16,227 pounds of heat-trapping carbon-dioxide emissions -- all while having fun on their bikes.

Bicycle-to-School Challenge, which is in its second year, was sponsored by Century Cycles and Raleigh Bicycles.

At Wednesday's closing celebration, Raleigh representative Sean Burkey presented Mayor Dennis Hanwell with a $1,000 certificate that will be used for bicycle-related needs such as road signs.

"I'm very pleased to see all the bikes parked at the schools. It is my honor to congratulate you," Hanwell told the students. "This program is very important for your health and well-being.

"I encourage students to keep bicycling."

Burkey presented each middle school with $500 certificates for bike improvements.

Century Cycles owner Scott Cowan provided six bicycles as prizes -- two to the winnter of an essay and photography contest, and four were raffled off.

The winner of the photography and essay contest were Root sixth-graders Rachel Tuffy and Lexi Acierto. They will have the chance to be published in the July issue of Great Lakes Courier.

Toward the end of the celebration, the gymnasium started to buzz as physical education teacher Melanie Condosta reached her hand into a barrel to pull the names of the two winners of new Raleigh bikes: sixth-grader Alex Weissberg and eigth-grader Brennamae Holladay.

To qualify for the raffle, students had to bicycle to school eight out of the 15 days of the challenge.

Winners of the Raleigh bicycles at Clagget Middle School were Jacob Johnson and Ryan Oleksiak, both seventh-graders.