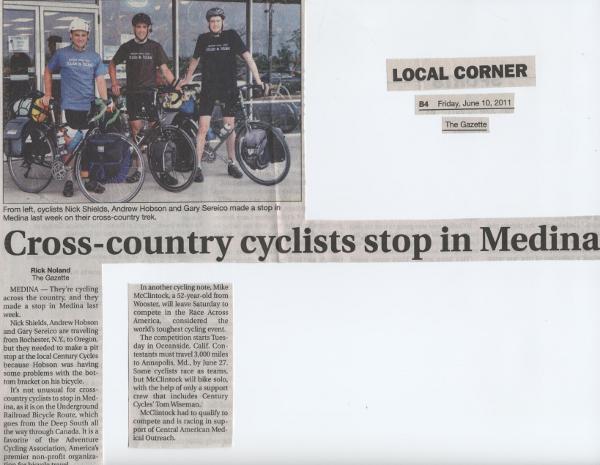 MEDINA - They're cycling across the country, and they made a stop in Medina last week.

Nick Shields, Andrew Hobson and Gary Sereico are traveling from Rochester, N.Y. to Oregon, but they needed to make a pit stop at the local Century Cycles because Hobson was having some problems with the bottom bracket on his bicycle.

It's not unusual for cross-country cyclists to stop in Medina, as it is on the Underground Railroad Bicycle Route, which goes from the Deep South all the way through Canada. It is a favorite of the Adventure Cycling Association, America's premier non-profit organization for bicycle travel.

In another cycling note, Mike McClintock, a 52-year-old from Wooster, will leave Saturday to compete in the Race Across America, considered the world's toughest cycling event.

The competition starts Tuesday in Oceanside, Calif. Contestants must travel 3,000 to Annapolis, Md., by June 27. Some cyclists race as teams, but will bike solo, with the help of only a support crew that includes Century Cycles' Tom Wiseman.

McClintock had to qualify to compete and is racing in support of Central American Medical Outreach.