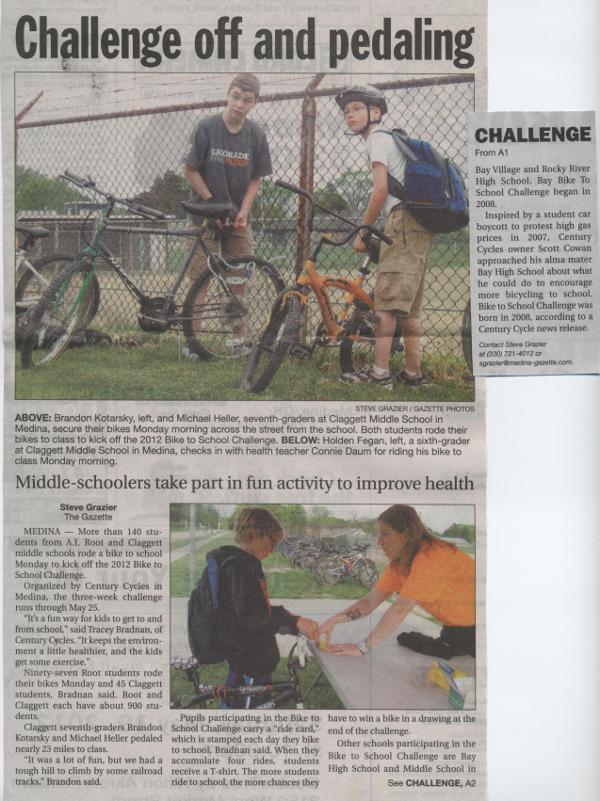 MEDINA - More than 140 students from A.I. Root and Claggett middle schools rode a bike to school Monday to kick off the 2012 Bike to School Challenge.

Organized by Century Cycles in Medina, the three-week challenge runs through May 25.

"It's a fun way for kids to get to and from school," said Tracey Bradnan of Century Cycles. "It keeps the environment a little healthier, and the kids get some exercise."

Ninety-seven Root students rode rode their bikes Monday and 45 Claggett students, Bradnan said. Root and Claggett each have about 900 students.

"It was a lot of fun, but we had a tough hill to climb by some railroad tracks," Brandon said.

Pupils participating in the Bike to School Challenge carry a "ride card," which is stamped each day they bike to school, Bradnan said. When they accumulate four rides, students receive a T-shirt. The more students ride to school, the more chances they have to win a bike in a drawing at the end of the challenge.

Inspired by a student car boycott to protest high gas prices in 2007, Century Cycles owner Scott Cowan approached his alma mater Bay High School about what he could do to encourage more bicycling to school. Bike to School Challenge was born in 2008, according to a Century Cycles news release.