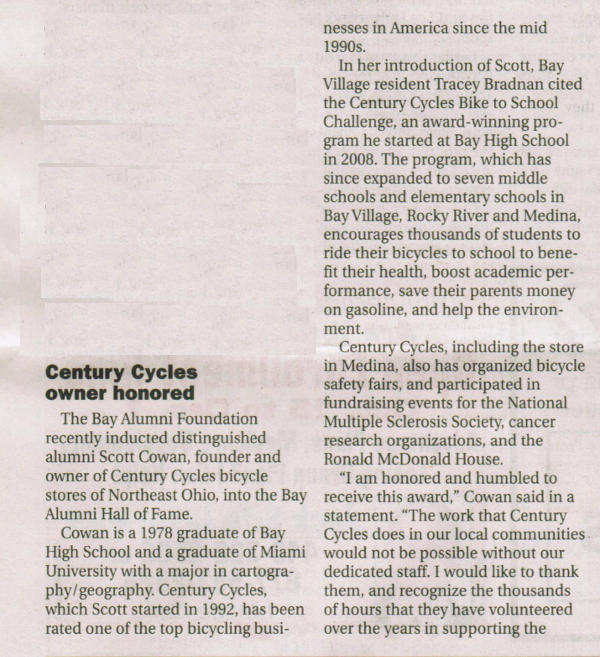 Cowan is a 1978 graduate of Bay High School and a graduate of Miami Univerisy with a major in cartography/geography. Century Cycles, which Scott started in 1992, has been rated one of the top bicycling businesses in America since the mid 1990s.

In her introduction of Scott, Bay Village resident Tracey Bradnan the Century Cycles Bike to School Challenge, an award-winning program he started at Bay High School in 2008. The program, which has since expanded to seven middle schools and elementary schools in Bay Village, Rocky River and Medina, encourages thousands of students to ride their bicycles to school to benefit their health, boost academic performance, save their parents money on gasoline, and help the environment.

Century Cycles, including the store in Medina, also has organized bicycle safety fairs, and participated in fundraising events for the National Multiple Sclerosis Society, cancer research organizations, and the Ronald McDonald House.

"I am honored and humbled to receive this award," Cowan said in a statement. "The work that Century Cycles does in our local communities would not be possible without our dedicated staff. I would like to thank them, and recognize the thousands of hours that they have volunteered over the years in supporting the