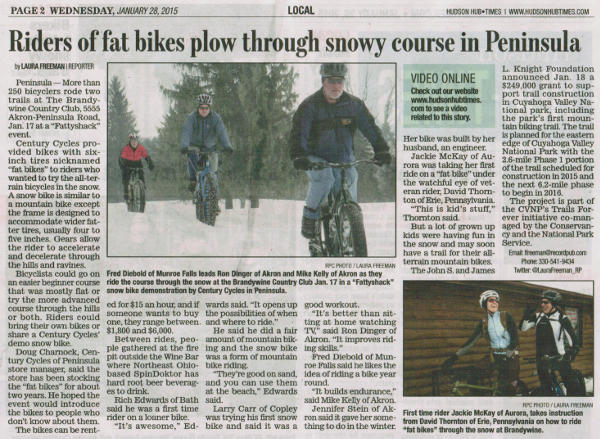 Century Cycles provided bikes with six-inch tires nicknamed "fat bikes" to riders who wanted to try the all-terrain bicycles in the snow. A snow bike is similar to a mountain bike except the frame is designed to accommodate wider fatter tires, usually four to five inches. Gears allow the rider to accelerate and decelerate through the hills and ravines.

Bicyclists could go on an easier beginner course that was mostly flat or try the more advanced course through the hills or both. Riders could bring their own bikes or share a Century Cycles' demo snow bike.

Doug Charnock, Century Cycles of Peninsula store manager, said the store has been stocking the "fat bikes" for about two years. He hoped the event would introduce the bikes to people who don't know about them.

Between rides, people gathered at the fire pit outside the Wine Bar where Northeast Ohio-based SpinDoktor has hard root beer beverages to drink.

Rich Edwards of Bath said he was a first time rider on a loaner bike.

"It's awesome," Edwards said. "It opens up the possibilities of when and where to ride."

"They're good on sand, and you can use them at the beach," Edwards said.

Larry Carr of Copley was trying his first snow bike and said it was a good workout.

Fred Diebold of Munroe Falls said he likes the idea of riding a bike year round.

Jennifer Stein of Akron said it gave her something to do in the winter. Her bike was built by her husband, an engineer.

Jackie McKay of Aurora was taking her first ride on a "fat bike" under the watchful eye of veteran rider, David Thornton of Erie, Pennsylvania.

"This is kid's stuff," Thornton said.

But a lot of grown up kids were having fun in the snow and may soon have a trail for their all-terrain mountain bikes.

The John S. and James L. Knight Foundation announced Jan. 18 a $249,000 grant to support trail construction in Cuyahoga Valley National park, including the park's first mountain biking trail. The trail is planned for the eastern edge of Cuyahoga Valley National Park with the 2.6-mile Phase 1 portion of the trail scheduled for construction in 2015 and the next 6.2-mile phase to begin in 2016.

The project is part of the CVNP's Trails Forever initiative co-managed by the Conservancy and the National Park Service.