From the July 2012 issue of the Great Lakes Courier: 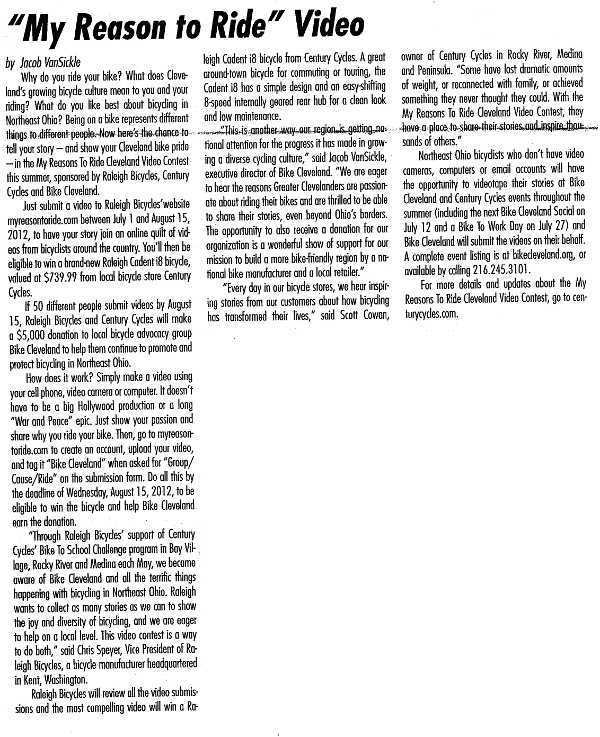 Why do you ride your bike? What does Cleveland’s growing bicycle culture mean to you and your riding? What do you like best about bicycling in Northeast Ohio? Being on a bike represents different things to different people. Now here’s the chance to tell your story – and show your Cleveland bike pride – in the My Reasons To Ride Cleveland Video Contest this summer, sponsored by Raleigh Bicycles, Century Cycles and Bike Cleveland.

Just submit a video to Raleigh Bicycles’website myreasontoride.com between July 1 and August 15, 2012, to have your story join an online quilt of videos from bicyclists around the country. You’ll then be eligible to win a brand-new Raleigh Cadent i8 bicycle, valued at $739.99 from local bicycle store Century Cycles.

If 50 different people submit videos by August 15, Raleigh Bicycles and Century Cycles will make a $5,000 donation to local bicycle advocacy group Bike Cleveland to help them continue to promote and protect bicycling in Northeast Ohio.

How does it work? Simply make a video using your cell phone, video camera or computer. It doesn’t have to be a big Hollywood production or a long “War and Peace” epic. Just show your passion and share why you ride your bike. Then, go to myreasontoride.com to create an account, upload your video, and tag it “Bike Cleveland” when asked for “Group/Cause/Ride” on the submission form. Do all this by the deadline of Wednesday, August 15, 2012, to be eligible to win the bicycle and help Bike Cleveland earn the donation.

“Through Raleigh Bicycles’ support of Century Cycles’ Bike To School Challenge program in Bay Village, Rocky River and Medina each May, we became aware of Bike Cleveland and all the terrific things happening with bicycling in Northeast Ohio. Raleigh wants to collect as many stories as we can to show the joy and diversity of bicycling, and we are eager to help on a local level. This video contest is a way to do both,” said Chris Speyer, Vice President of Raleigh Bicycles, a bicycle manufacturer headquartered in Kent, Washington.

Raleigh Bicycles will review all the video submissions and the most compelling video will win a Raleigh Cadent i8 bicycle from Century Cycles. A great around-town bicycle for commuting or touring, the Cadent i8 has a simple design and an easy-shifting 8-speed internally geared rear hub for a clean look and low maintenance.

“This is another way our region is getting national attention for the progress it has made in growing a diverse cycling culture,” said Jacob VanSickle, executive director of Bike Cleveland. “We are eager to hear the reasons Greater Clevelanders are passionate about riding their bikes and are thrilled to be able to share their stories, even beyond Ohio’s borders. The opportunity to also receive a donation for our organization is a wonderful show of support for our mission to build a more bike-friendly region by a national bike manufacturer and a local retailer.”

“Every day in our bicycle stores, we hear inspiring stories from our customers about how bicycling has transformed their lives,” said Scott Cowan, owner of Century Cycles in Rocky River, Medina and Peninsula. “Some have lost dramatic amounts of weight, or reconnected with family, or achieved something they never thought they could. With the My Reasons To Ride Cleveland Video Contest, they have a place to share their stories and inspire thousands of others.”

Northeast Ohio bicyclists who don’t have video cameras, computers or email accounts will have the opportunity to videotape their stories at Bike Cleveland and Century Cycles events throughout the summer (including the next Bike Cleveland Social on July 12 and a Bike To Work Day on July 27) and Bike Cleveland will submit the videos their behalf. A complete event listing is at bikecleveland.org, or available by calling 216.245.3101.

For more details and updates about the My Reasons To Ride Cleveland Video Contest, go to centurycycles.com.