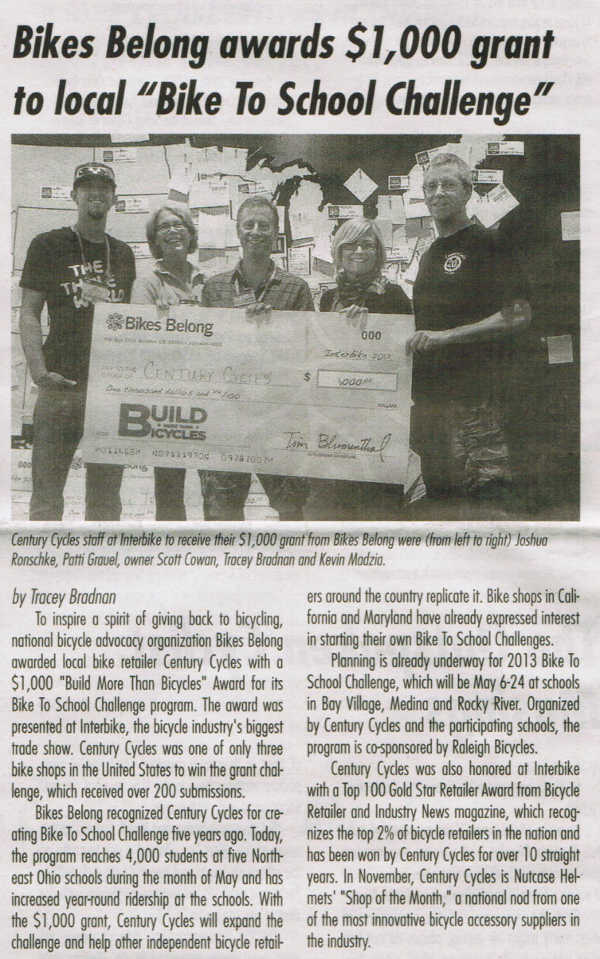 To inspire a spirit of giving back to bicycling, national bicycle advocacy organization Bikes Belong awarded local bike retailer Century Cycles with a $1,000 "Build More Than Bicycles" Award for its Bike To School Challenge program. The award was presented at Interbike, the bicycle industry's biggest trade show. Century Cycles was one of only three bike shops in the United States to win the grant challenge, which received over 200 submissions.

Bikes Belong recognized Century Cycles for creating Bike To School Challenge five years ago. Today, the program reaches 4,000 students at five Northeast Ohio schools during the month of May and has increased year-round ridership at the schools. With the $1,000 grant, Century Cycles will expand the challenge and help other independent bicycle retailers around the country replicate it. Bike shops in California and Maryland have already expressed interest in starting their own Bike To School Challenges.

Planning is already underway for 2013 Bike To School Challenge, which will be May 6-24 at schools in Bay Village, Medina and Rocky River. Organized by Century Cycles and the participating schools, the program is co-sponsored by Raleigh Bicycles.

Century Cycles was also honored at Interbike with a Top 100 Gold Star Retailer Award from Bicycle Retailer and Industry News magazine, which recognizes the top 2% of bicycle retailers in the nation and has been won by Century Cycles for over 10 straight years. In November, Century Cycles is Nutcase Helmets' "Shop of the Month," a national nod from one of the most innovative bicycle accessory suppliers in the industry.