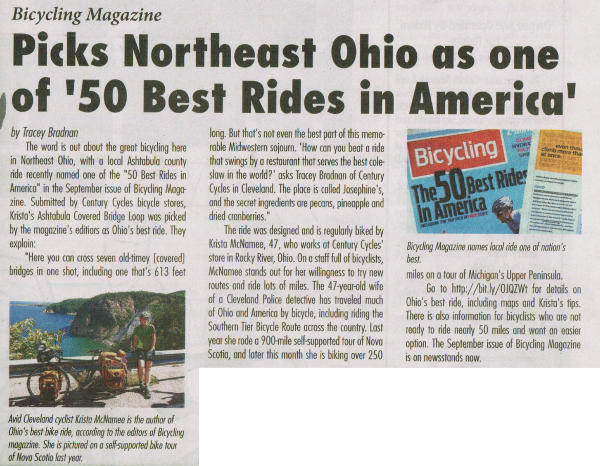 The word is out about the great bicycling here in Northeast Ohio, with a local Ashtabula County ride recently name one of the "50 Best Rides in America" in the September issue of Bicycling Magazine. Submitted by Century Cycles bicycle stores, Krista's Ashtabula Covered Bridge Loop was picked by the magazine's editors as Ohio's best ride. They explain:

"Here you can cross seven old-timey [covered] bridges in one shot, including one that's 613 feet long. But that's not even the best part of this memorable Midwestern sojourn. 'How can you beat a ridde that swings by a restaurant that serves the best cole-slaw in the world?' asks Tracey Bradnan of Century Cycles in Cleveland. The place is called Josephine's, and the secret ingredients are pecans, pineapple and dried cranberries."

The ride was designed is is regularly biked by Krista McNamee, 47, who works at Century Cycles' store in Rocky River, Ohio. On a staff full of bicyclists, McNamee stands out for her willingness to try new routes and ride lots of miles. The 47-year-old wife of a Cleveland Police detective has travelled much of Ohio and America by bicycle, including riding the Southern Tier Bicycle Route across the country. Last year she rode a 900-mile self-supported tour of Nova Scotia, and later this month she is biking over 250 miles on a tour of Michigan's Upper Peninsula.

Go to http://bit.ly/OJQZWt for details on Ohio's best ride, including maps and Krista's tips. Ther is also information for bicyclists who are not ready to ride nearly 50 miles and want an easier option. The September issue of Bicycling Magazine is on newsstands now.