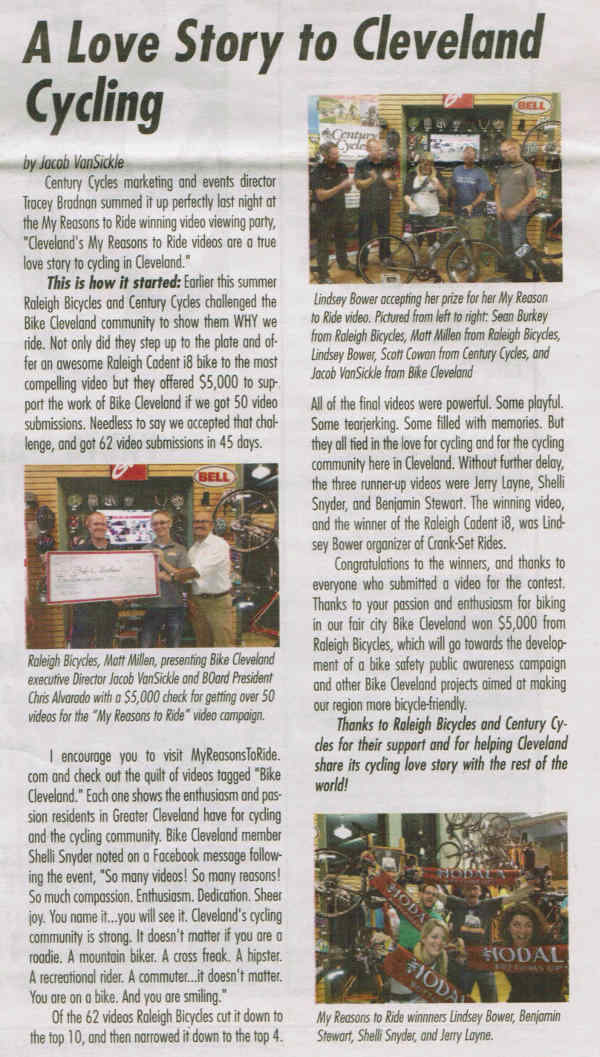 Century Cycles marketing and events director Tracey Bradnan summed it up perfectly last night at the My Reasons to Ride winning video viewing party, "Cleveland's My Reasons to Ride videos are a true love story to cycling in Cleveland."

This is how it started: Earlier this summer Raleigh Bicycles and Century Cycles challenged the Bike Cleveland community to show them WHY we ride. Not only did they step up to the plate and offer an awesome Raleigh Cadent i8 bike to the most compelling video but they offered $5,000 to support the work of Bike Cleveland if we got 50 video submissions. Needless to say we accepted that challenge, and got 62 video submissions in 45 days.

I encourage you to visit MyReasonsToRide.com and check out the quilt of videos tagged "Bike Cleveland." Each one shows the enthusiasm and passion residents in Greater Cleveland have for cycling and the cycling community. Bike Cleveland member Shelli Snyder noted on a Facebook message followign the event, "So many videos! So many reasons! So much compassion. Enthusiasm. Dedication. Sheer joy. You name it...you will see it. Cleveland's cycling community is strong. It doesn't matter if you are a roadie. A mountain biker. A cross freak. A hipster. A recreational rider. A commuter...it doesn't matter. You are on a bike. And you are smiling."

Of the 62 videos Raleigh Bicycles cut it down to the top 10, and then narrowed it down to the top 4. All of the final videos were powerful. Some playful. Some tearjerking. Some filled with memories. But they all ties in the love for cycling and for the cycling community here in Cleveland. Without further delay, the three runner-up videos were Jerry Layne, Shelli Snyder, and Benjanmin Stewart. The winning video, and the winner of the Raleigh Cadent i8, was Lindsey Bower organizer of Crank-Set Rides.

Congratulations to the winners, and thanks to everyone who submitted a video for the contest. Thanks to your passion and enthusiasm for biking in our fair city Bike Cleveland won $5,000 from Raleigh Bicycles, which will go towards the development of a bike safety public awareness compaign and other Bike Cleveland projects aimed at making our region more bicycle-friendly.

Thanks to Raleigh Bicycles and Century Cycles for their support and for helping Cleveland share its cycling love story with the rest of the world!